My husband and I have never taken the kids (now in their late teens) on a ski holiday. Instead, we have spent most winter holidays in destinations far away from cold Scandinavia. For two reasons: 1) Old knee injuries; 2) An urge to escape the cold and the dark and experience different cultures.

This Christmas was different. We missed our daughter who is currently in the United States, and we wanted to find a trip that our son would do with us without being bored to death. So, when he announced that he was going skiing this winter with high school friends, the idea of a short family ski trip to Sweden popped up. It was “sold” as a training trip, where one could safely make the typical beginner’s mistakes. (The oldies had tried skiing a few times – about a hundred years ago – and knew the basics.)

We did some online research and found Valfjället in Värmland, a tiny ski resort 6½ hours’ drive from Copenhagen. It appeared to be the southernmost destination where we could be sure of snow. And, it turned out right: On Boxing Day, we took a ferry to Helsingborg and drove north. Almost 6 hours later, surroundings began to look white (from what we could see in the darkness at 4 pm). 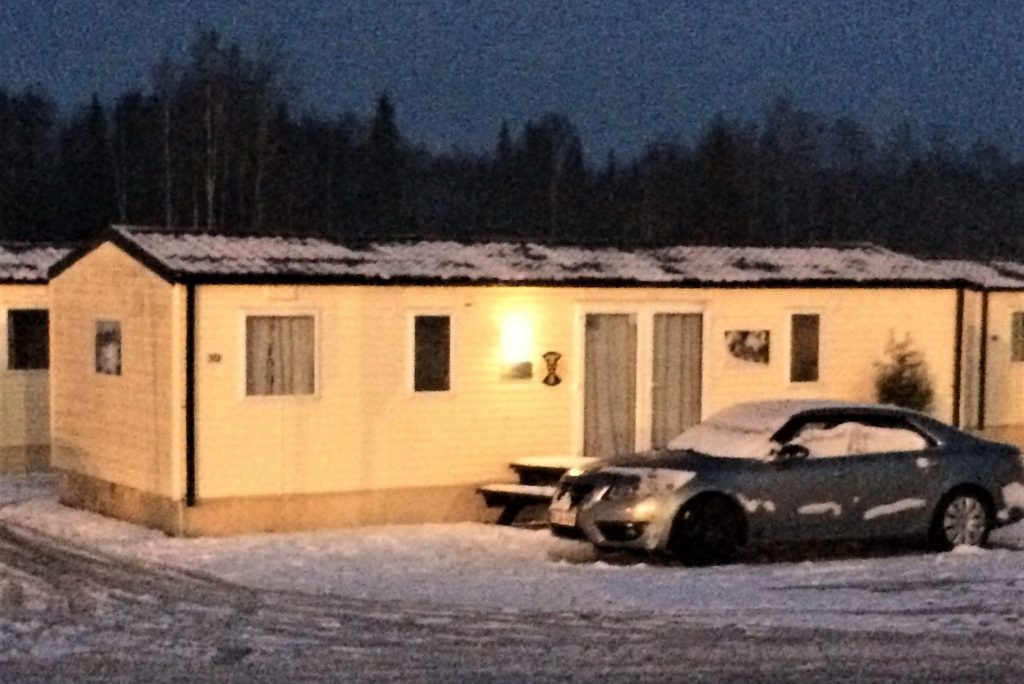 We arrived in Valfjället soon after and found our ‘stuga’ at the foot of the ski slopes. It was not a romantic log cabin, more like a workmen’s hut. But it was perfect with ample space for us: Three bedrooms, two bathrooms, and kitchen-dining area with a couch and an electric fireplace. 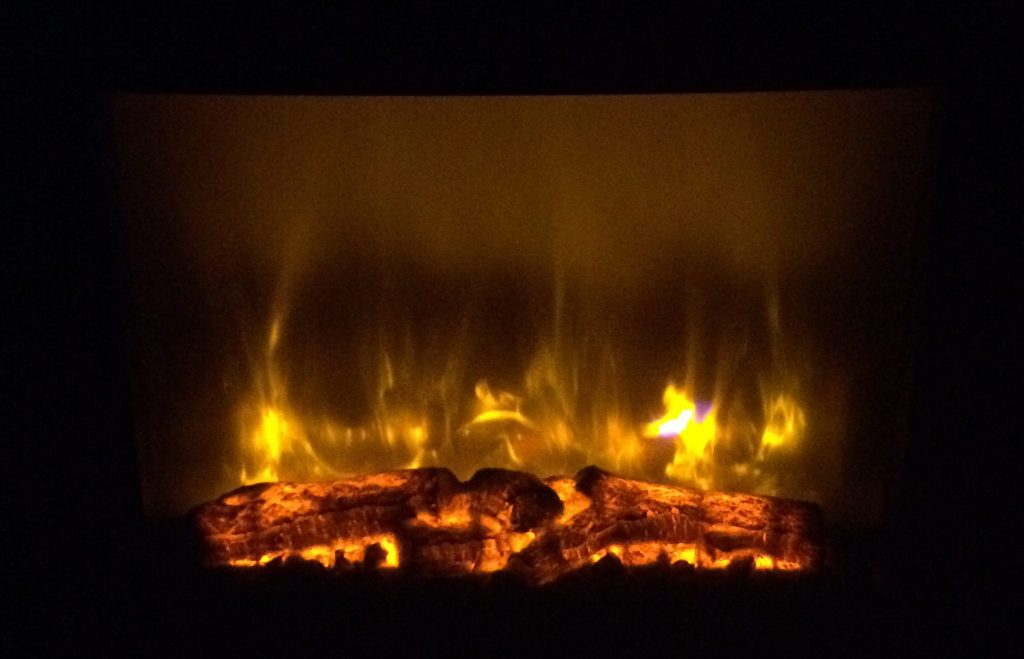 Valfjället is situated in a wooded area, close to Norway’s border, on the same latitude as Oslo. The nearest small town is Charlottenberg, where – we checked online – there were a shopping mall and a few  restaurants. The first night, after driving around town where not much was happening, we ended up with take-away pizza. We went in, ordered pizzas and beers, and forgot for a moment that we were in Sweden, where restaurants only serve alcohol for “immediate consumption”. So, just pizza, no beer.

Next morning, we went to Charlottenberg mall to buy breakfast and stuff we had forgotten back home, like boots! (Wasn’t me ?).  To our surprise, there were Norwegian cars everywhere on the parking lot. Of course, border trade! This was the reason for placing a huge mall in the middle of nowhere. For Norwegians to spend their oil money. (Yes, I am an envious Dane). 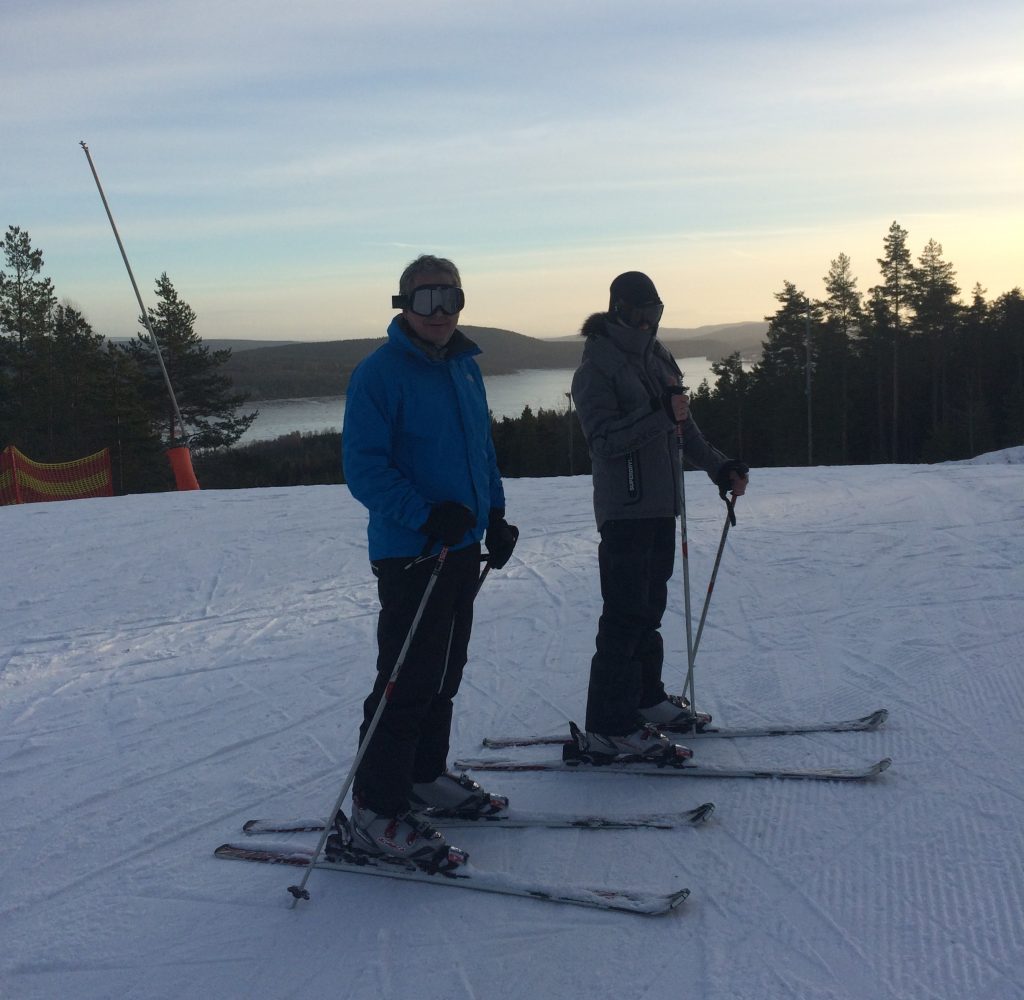 Finally, it was time to go to Valfjället ski hire: We got the whole gear, except helmets which we thought would be overkill considering the mainly green and blue slopes of the area. My husband put on knee braces and felt like Forrest Gump. 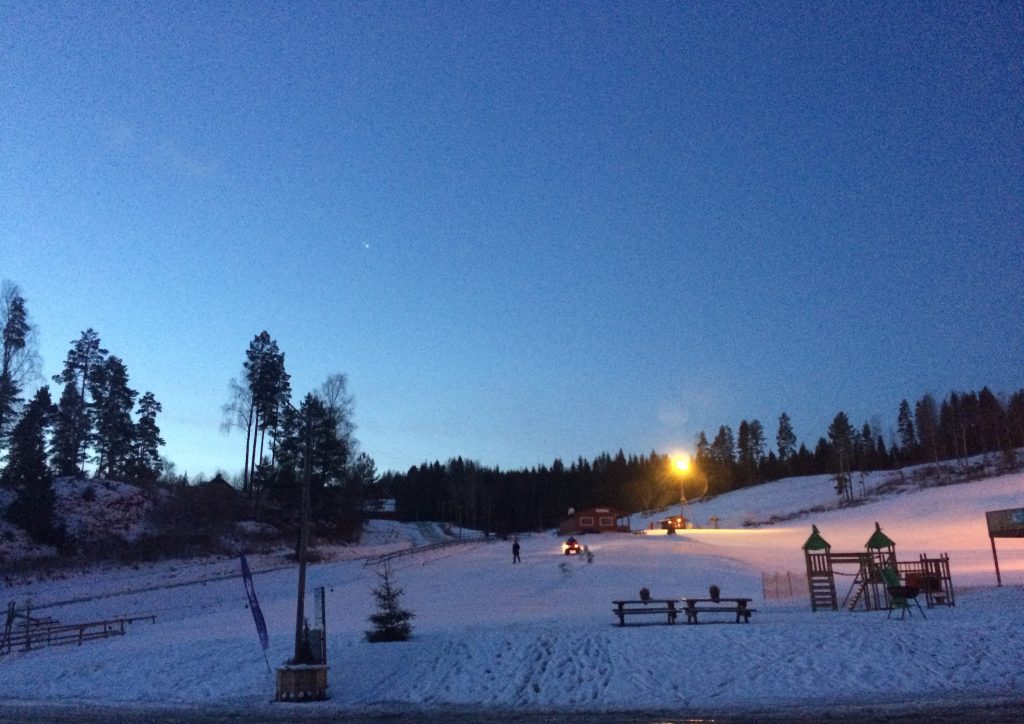 After a humble lift ride up the children’s slope (later, we found out that most adults walked up with skis on their shoulder) we arrived at the first “real” platter lift. Here, we struggled among Swedish children who, without poles, effortlessly pushed forward to the lift.’ 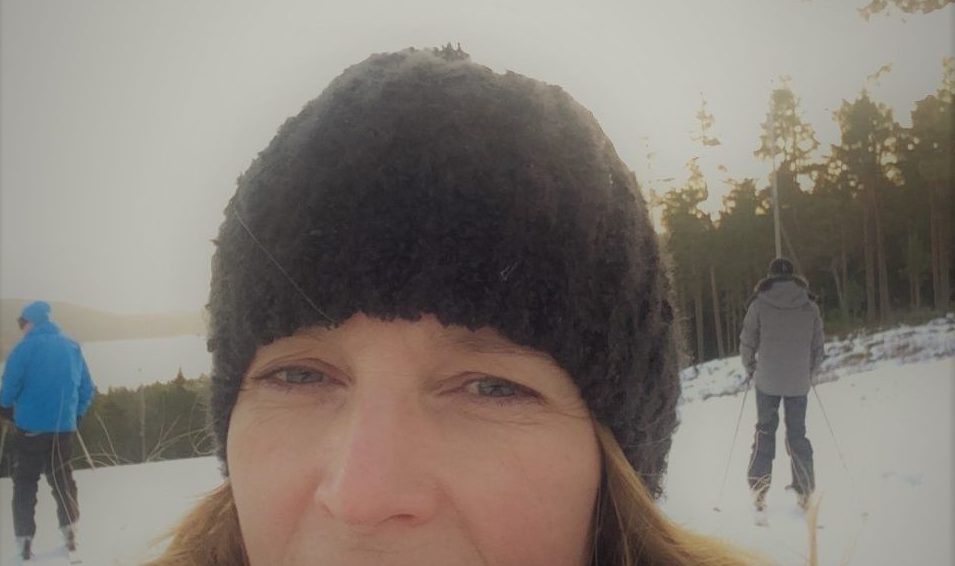 All three of us got on the lift and made it safely to the top. Now, time for hesitation (we agreed to let everyone else run first, so we could have plenty of space) and a short instruction in ploughing technique. We used the full width of slopes, and took turns in pulling each other up after a crash. 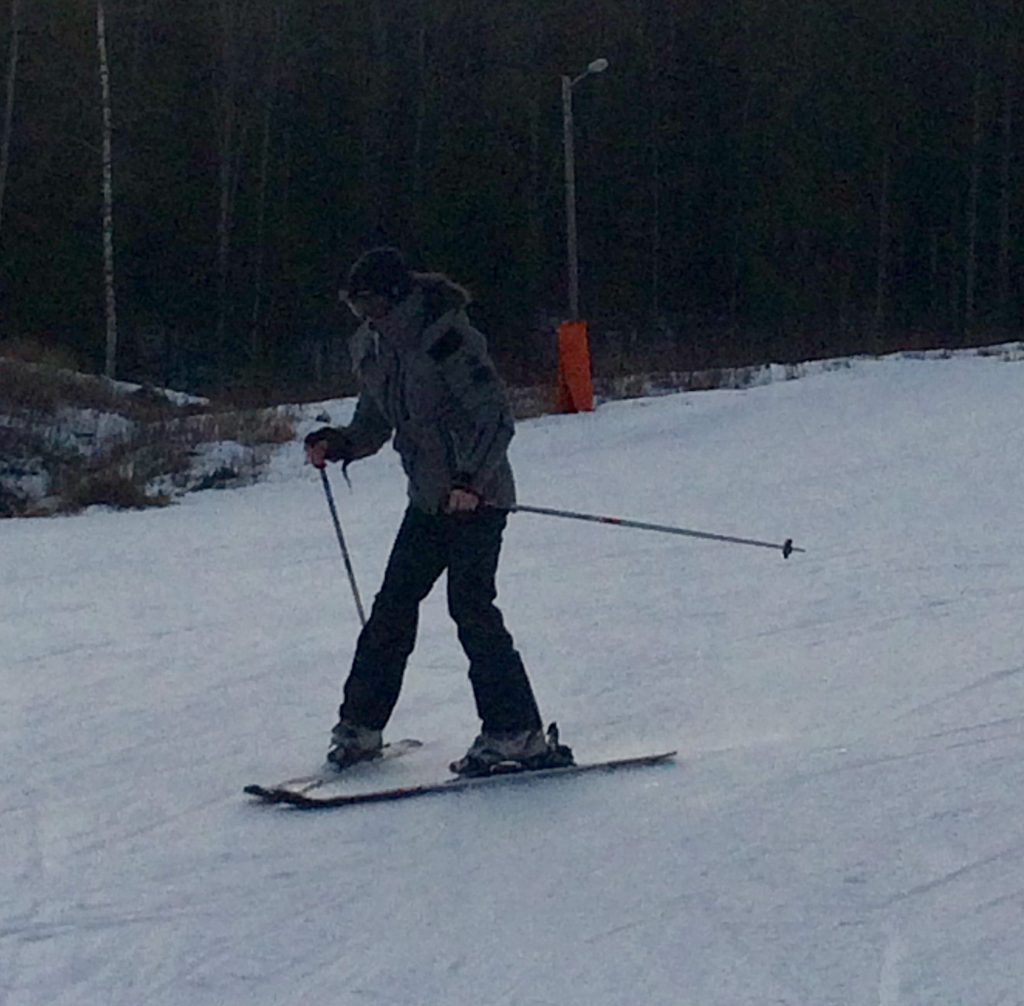 After a little while, we were brave enough to take the longest lift, a t-bar. We had clear weather and a beautiful view from the top over hills, forests and lakes. But, only one way down. Phew, stiff legs, trying to stay calm and keep focused. It went well, and we took more rides. For me, the hardest part was the t-bar lift, especially after watching people (mentioning no names) fall off. I stood stiff as a board all the way up.

All in all, the first day was a success. Aside from a sprained thumb, everyone was okay. We celebrated in the evening with a nice meal in the Scottish Lochlann Steakhouse, which looked more like a pub with Norwegian flags, Danish music, and Turkmenish football jerseys on the walls.

Back in the stuga with poor WIFI, our evening entertainment consisted of card games, books, and Swedish tv channels showing ski jumping games and Swedish 1970s movies. So, we went to bed early. 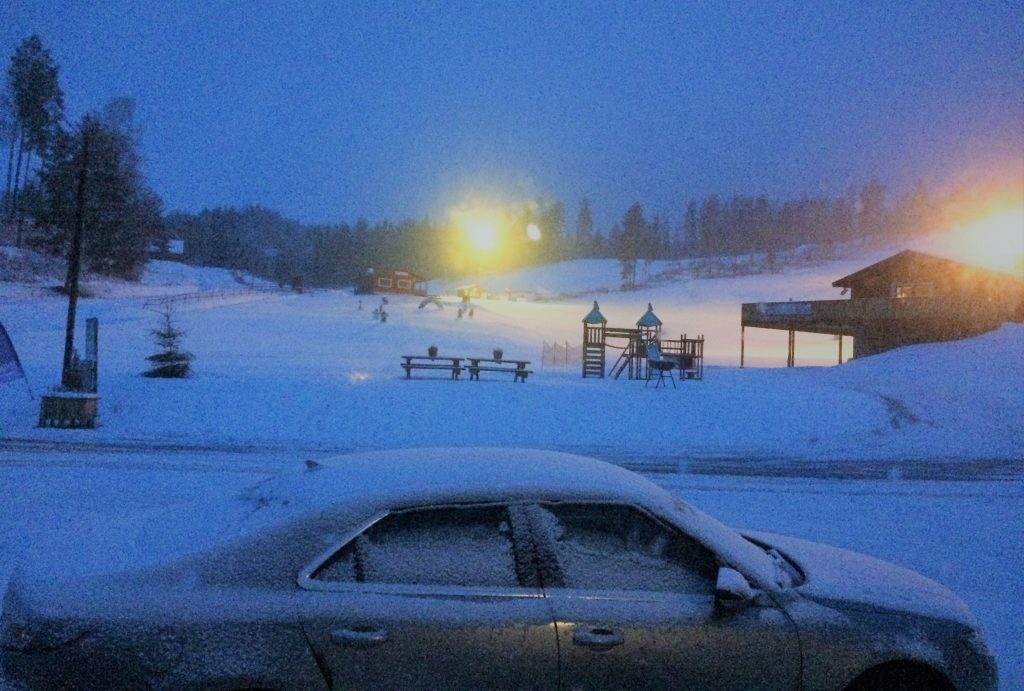 Next morning, we woke up to snowfall. Unfortunately, the “Scottish” food had caused our son a minor stomach infection, so he stayed home for a few hours, while his parents made wide swings and a lot of ploughing down the slopes. My beginner’s luck from the previous day was gone, and I felt my skis were doing their own thing, completely out of my control. After lunch, our son felt better and joined us. Gradually, we went faster, not always intentionally, though.

Late afternoon it was time to return the ski equipment, which suited us all very well. A soft start. And no broken limbs, hooray! We had Asian dinner in the mall, returned to the stuga, and enjoyed a newspaper quiz and a tv-program about Volvo (!). 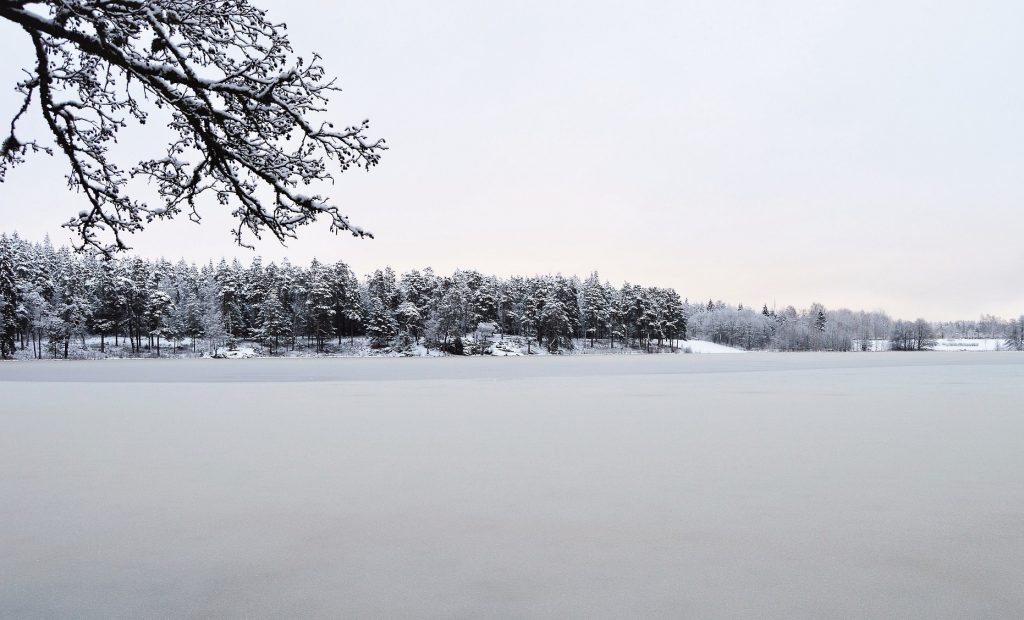 We got up early the last morning and drove home through a beautiful snowy landscape, which we had missed on our way out due to darkness. In high spirits, despite start problems and traffic jam on the highway. Mission completed. We are seriously considering a ski holiday again next year, with the other teenager. 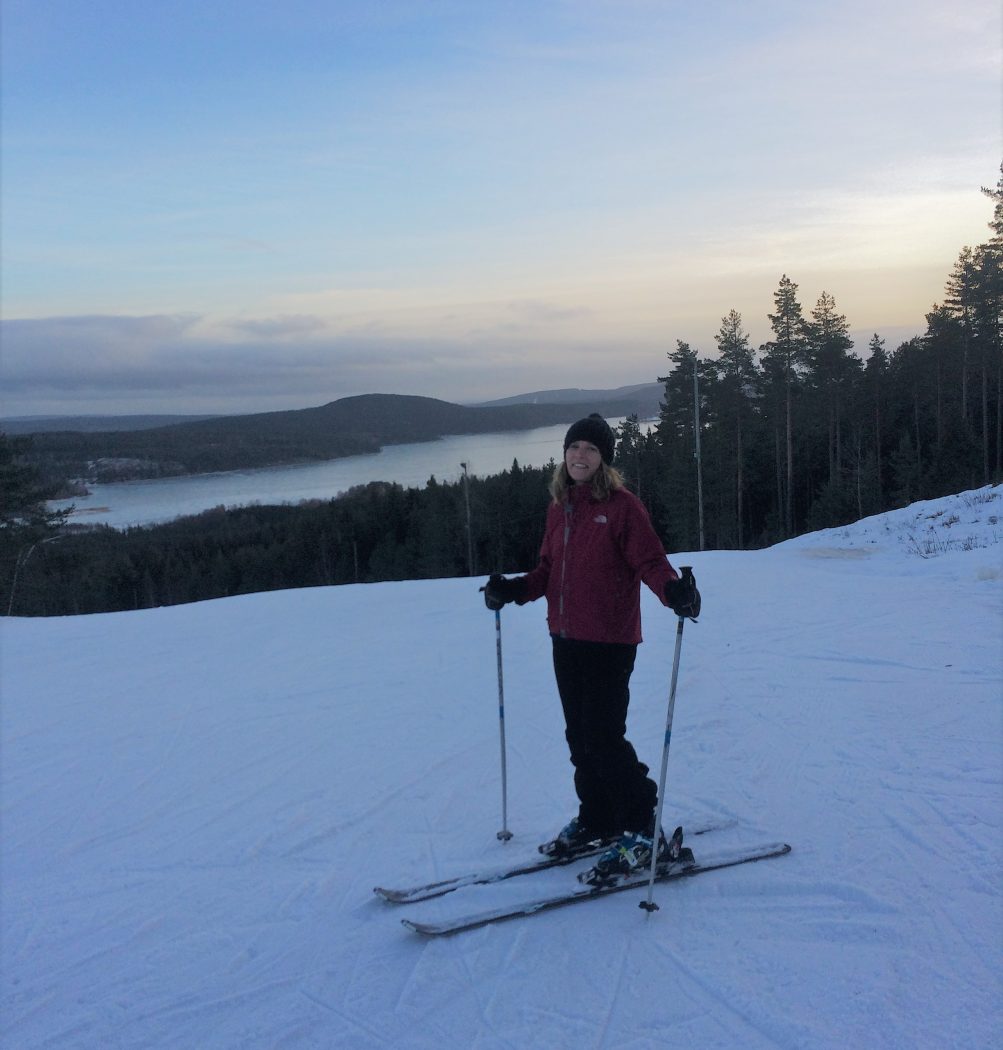