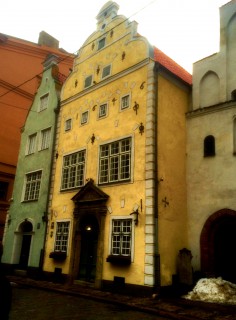 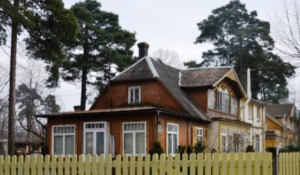 Art nouveau and decay                                Jurmala, which to my ears sounds Finnish, is a coastal area approximately 30 km from Riga in Latvia. Here, I visit the Danish ambassador and his family for three days in January. I arrive Friday evening, and my nose is pressed flat against the car window while we drive through the streets: I see one beautiful art nouveau villa next to another, all different, many with pastel-colored wooden structures and beautiful carvings. 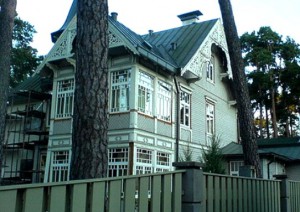 Jurmala is an affluent neighborhood, and many wealthy Russians live here. Earlier on it was also home to quite a few ambassadors, my hosts tell me, but most of them have moved to Riga. Some villas are deserted and in decay, looking like echoes of a bygone era. But, the Russian ambassador – and the Danish  – are still here. 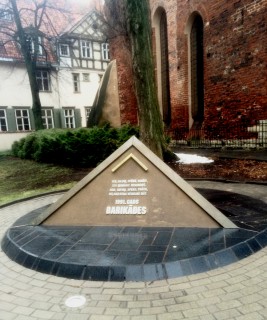 Dramatic history, mixed people                 Up to Latvia’s independence war and independence in 1920, Jurmala was popular among Baltic Germans, who represented a minority elite in Latvia during the Russian Empire. After 1920, the Baltic Germans either fled or were resettled (by Hitler) in Germany. The Latvians have been under changing dominions: Sweden, Russia /Soviet Union, Poland, and Germany have, in turn, conquered or occupied all or part of the country. This turbulence impacted to some extent demographics: Today, Russians make up more than one fourth of the population, and there are smaller minorities from Poland, Lithuania, Ukraine, and Belarus. Indigenous Latvians make a majority of 62 percent. In 2012, they voted against Russian as the country’s second official language. And to obtain Latvian citizenship, you must be able to speak Latvian. 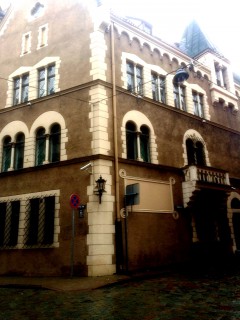 Of course, I need to see the Danish Embassy, located in Riga’s Old Town. It is a fine old building with a balcony which, according to my hosts, have been used for recordings of Romeo and Juliet in a Latvian version. Streets are cobblestone with restored old houses. I have visited Riga once before, in 1995, and I remember buildings as being ramshackle, but also full of renovation activity. This was four years after Latvia broke away from the Soviet Union, which had controlled the country since the end of WW2. 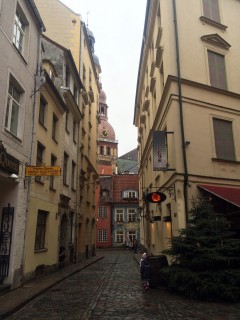 We visit a – from the outside – modest looking Museum of the Barricades of 1991. It tells about the dramatic events which took place 25 years ago, when Latvia declared its independence and built barricades to protect against military action by the Soviet Union, which would not accept the country’s independence. 700,000 Latvians built barricades and held peaceful demonstrations, and an unknown number of them were killed by Russian military. 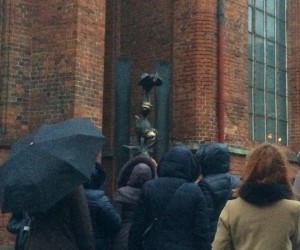 Elsewhere in the city, a group of tourists flocks around a sculpture depicting a donkey, a dog, a cat, and a rooster from the Brothers Grimm fairy tale ‘Town Musicians of Bremen’. None of us get the connection to Riga until I read online that the sculpture is a gift from sister city Bremen, and that the animals (aka Latvians) are gazing in astonishment through the Iron Curtain to a new world with sudden independence.

We eat lunch in restaurant Kolonade right by the Opera House and the River Daugava, which flows through the city. Very nice food, accompanied by pop muzak. My hosts tell that most restaurants play this kind of music. 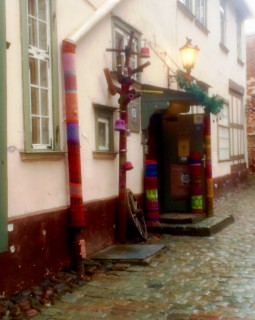 In galleries with impressive constructions of huge wooden beams, and we look at interesting paintings, juicy sculptures,  and whimsical jewellery. 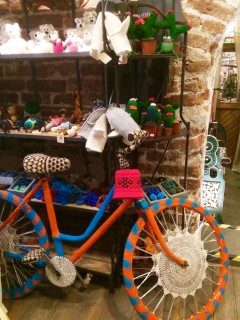 felted in the softest wool and beautiful patterns, from shawls and mittens to cacti. We buy two hats and a cardigan, inspired by the cold weather. Amber shops are seen everywhere, with amber in all forms, including what I find to be rather kitschy “bonsai trees” with leaves made out of tiny amber pieces. 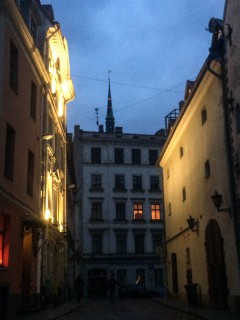 It is close to Saturday evening, but there is a quiet Sunday atmosphere in Riga. A saxophone player is trying to make a little money, but he soon gives up, understandably. Only the numerous souvenir shops reveal that Riga can attract more tourists in warmer seasons.

Sunday stroll on the beach
We spend the Sunday back in Jurmala, where each house is surrounded by tall conifers, giving you the feel of driving in a forest. In fact, it is not just a

feeling, as wooded trails meander in a blueberry covered, hilly “hobbit” terrain towards the wide sandy beach with calm waters. The forest terrain is actually dunes where trees were planted 100 years ago as coastal protection. We park the embassy car, remove the Danish flag (we have been driving with style!), and walk to the beach, where the water edge is covered by  snow and ice. 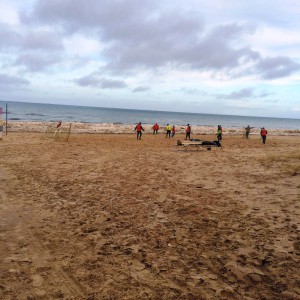 A bunch of middle-aged Latvians or Russians (hard for me to distinguish the languages) are playing football, and an athletic young man strips off most of his clothes and walk barefoot on the snow and into the water. I am curious to see if his teeth are chattering, but my hosts lead me in the opposite direction along the beach. We end our walk with lunch at the chic 36. Line Grill Restaurant, located close to the beach, behind a strip of trees, so it doesn’t interfere with beach life. Again, lovely food to the tunes of pop muzak. 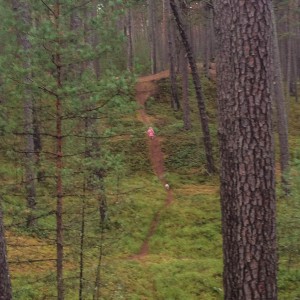 The area is bustling with weekend activity; some people walk with trecking poles and/or  dogs, others run in the wooded dunes where – presumably EU-funded – wooden bridges make it easy to move around. I notice a couple of nice details: Instead of asphalt, the parking lot is covered by a random pattern of concrete blocks. And the area look clean with almost no waste spread out. 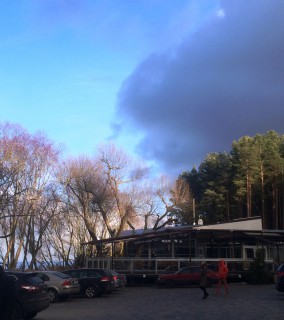 Wrapping up on the plane

On my short flight trip back to Copenhagen (1.40 hours), I try to wrap up on the trip: 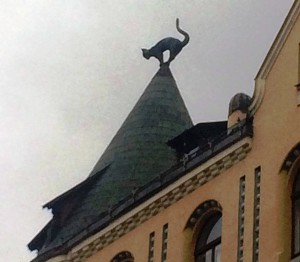 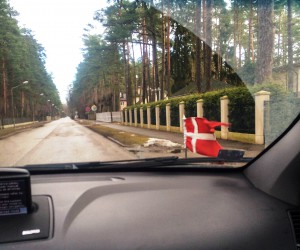