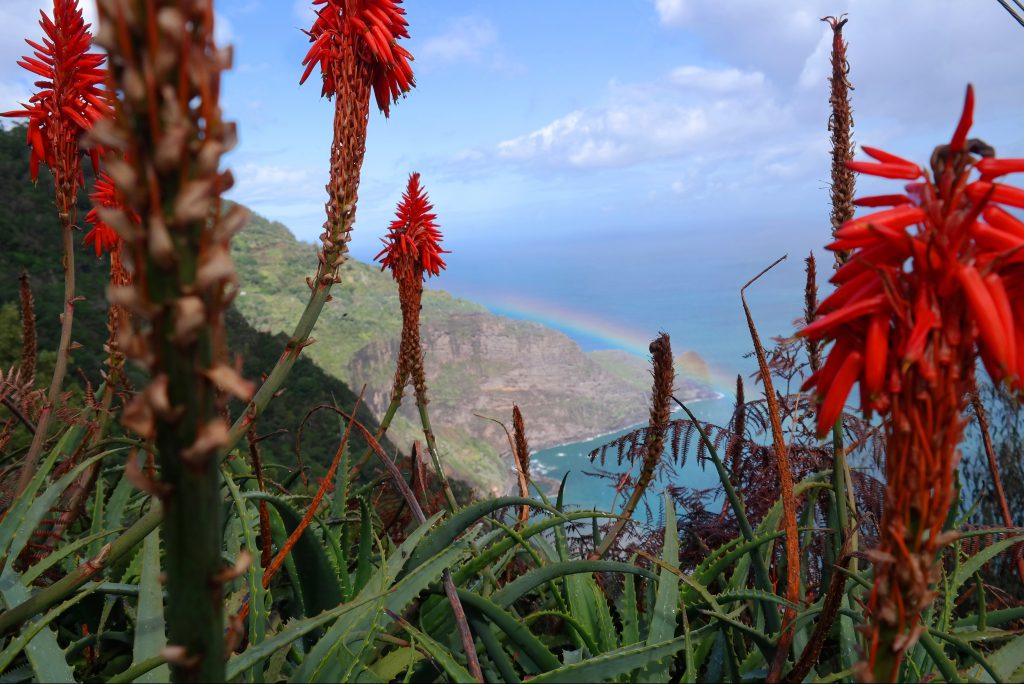 The volcanic island of Madeira has a lot to offer

Madeira is popular with pensioners. This was confirmed to me during our February holidays. And it’s ok. Even though we are family with teenagers. And February is a fine time to visit, if you can live with temperatures between 13C and 22C, and light showers. 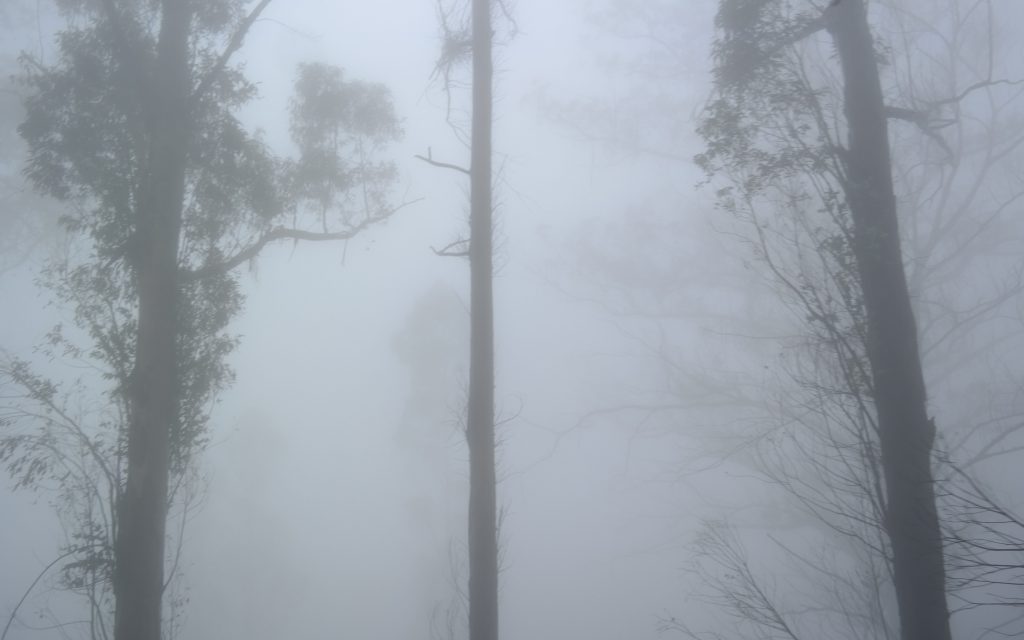 Worst were the days, when visibility in the mountains was less than 2 meters: Not ideal for a walking holiday along the Levadas, the old irrigation canals. Luckily, we hiked in fine weather, and on rainy days we rented a car and toured the island. That was when we discovered Madeira is like Swiss cheese; riddled with tunnels. 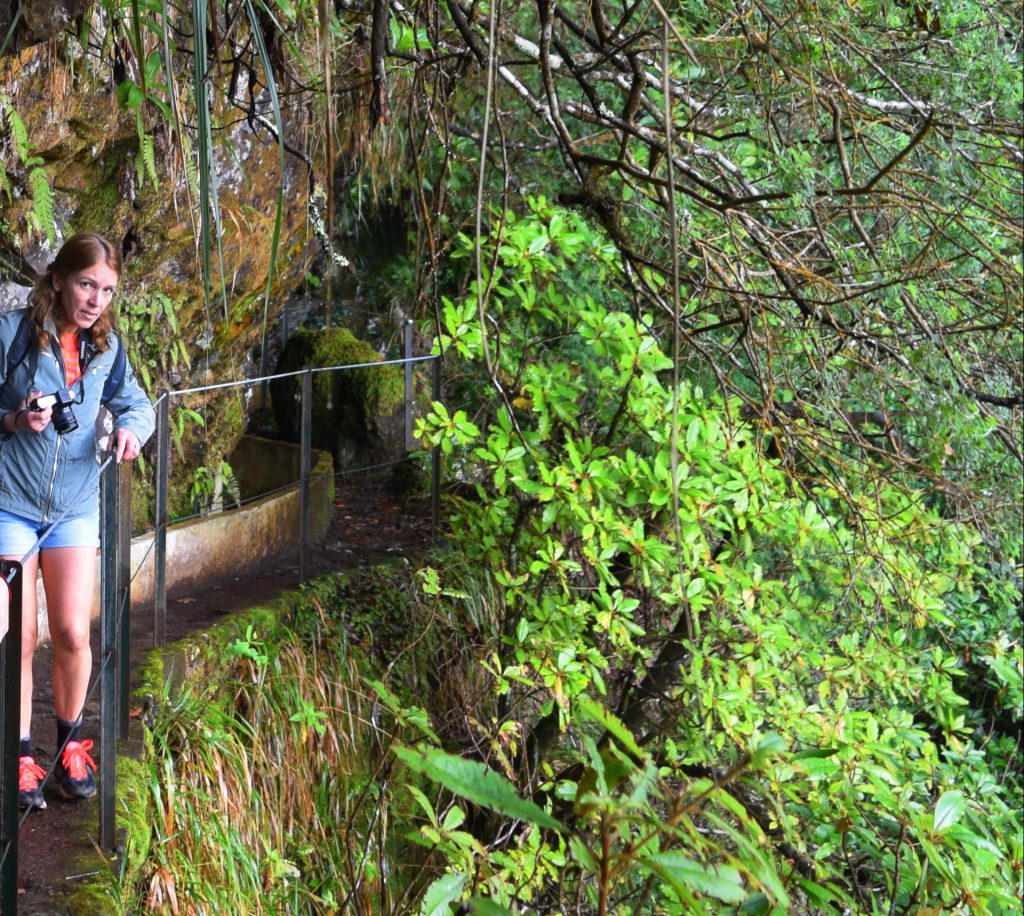 Our 12 km hike, Levada do Furado, was on a good path through a wooded mountainous stretch. We saw blooming mimosa trees, waterfalls, and snowy peaks. After the hike, we were picked up by our enthusiastic driver who came straight from the mountain top, where he had seen snowflakes! He even had it on video! The wow effect on us was limited. We had just left Denmark covered in snow two days earlier. 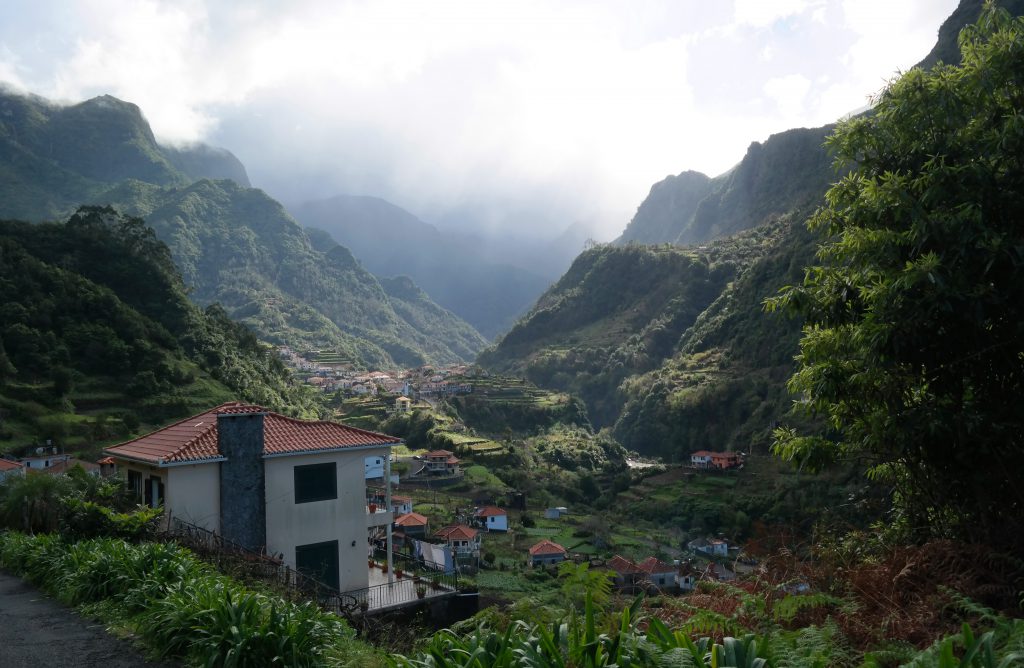 The north coast is dramatic and stunningly beautiful with steep cliffs, myriad waterfalls, deep gorges, and pent villages. A great lunch stop with fabulous views was Quinta do Furao (thanks for the tip, Ewa!). 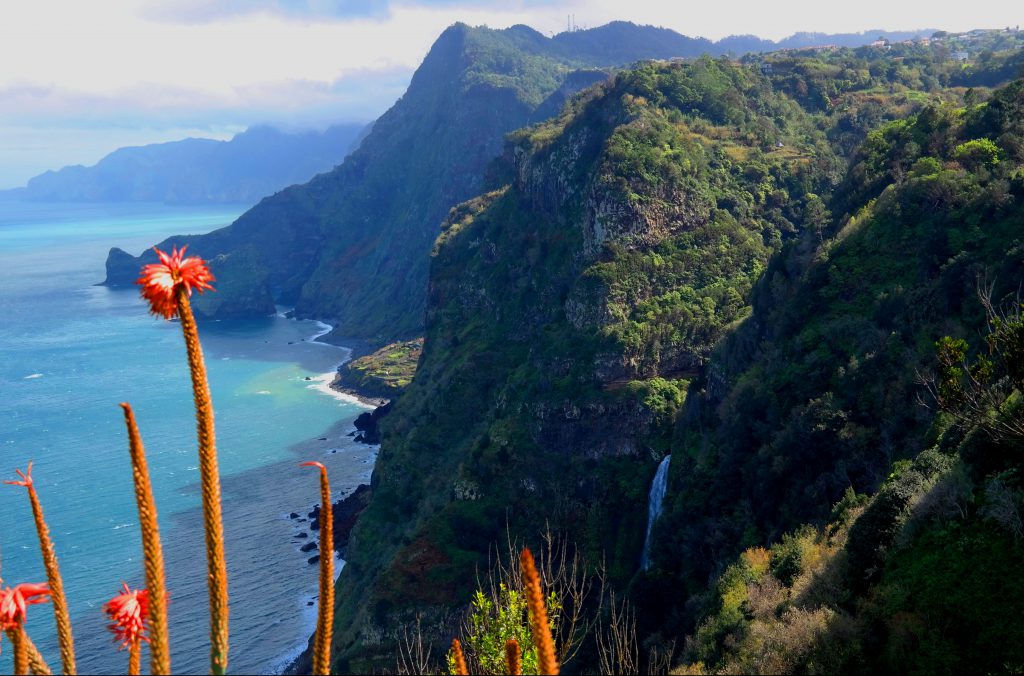 In Porto Moniz on the island’s northeastern tip, we had ice cream and were spellbound by the natural rock pools, formed by volcanic lava. 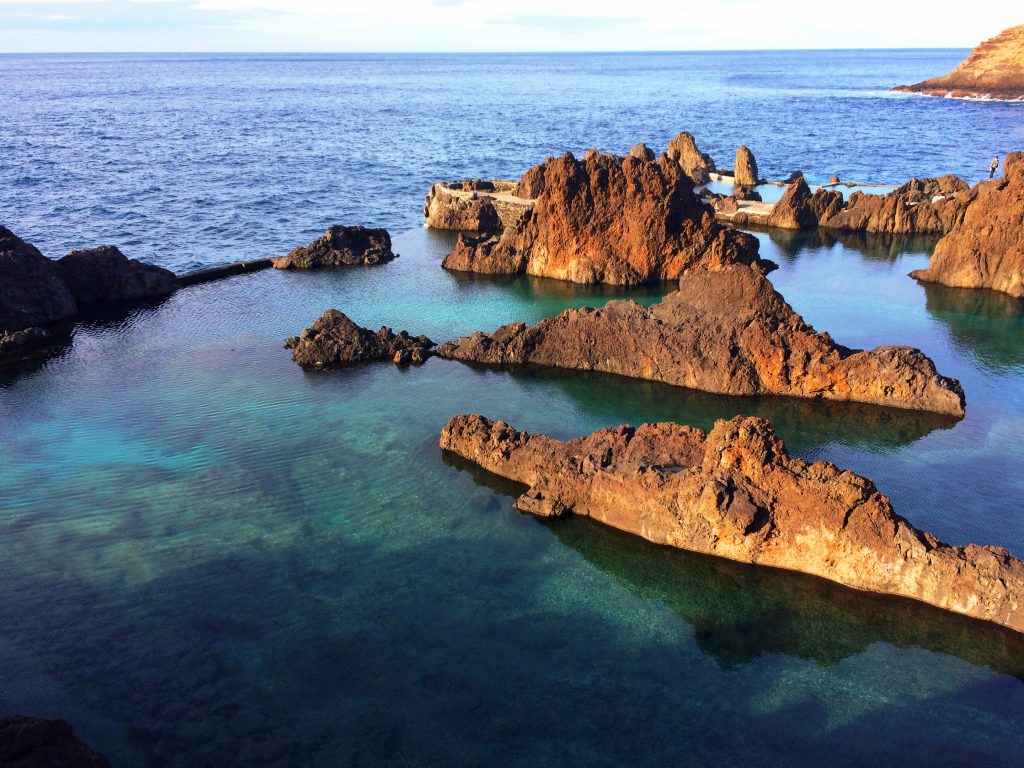 We spent a few days strolling the main town, Funchal: We visited the market (open all day), tasted exotic fruits, did some shopping, watched street art, and tried out several restaurants in the old town. 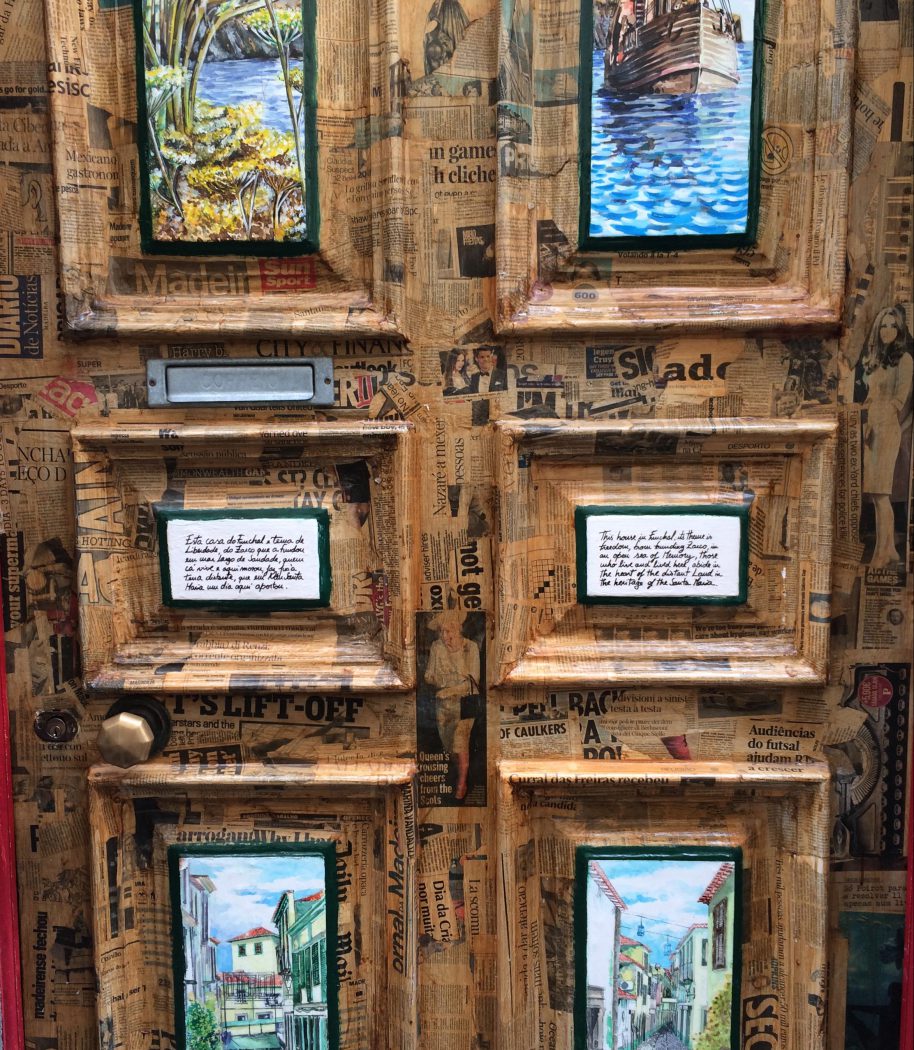 Mozart had good quality and a bit of everything, while Gavião Novo just accross had great seafood. We dined late, and often some dishes were sold out: We took it as a sign of fresh ingredients. The Ritz on the main street had both tasty food and dessert options, open air seating on the balcony, and a funny waiter :o). The restaurant is named after its founder, a New York businessman with Swiss roots who fell in love with a girl from Madeira. 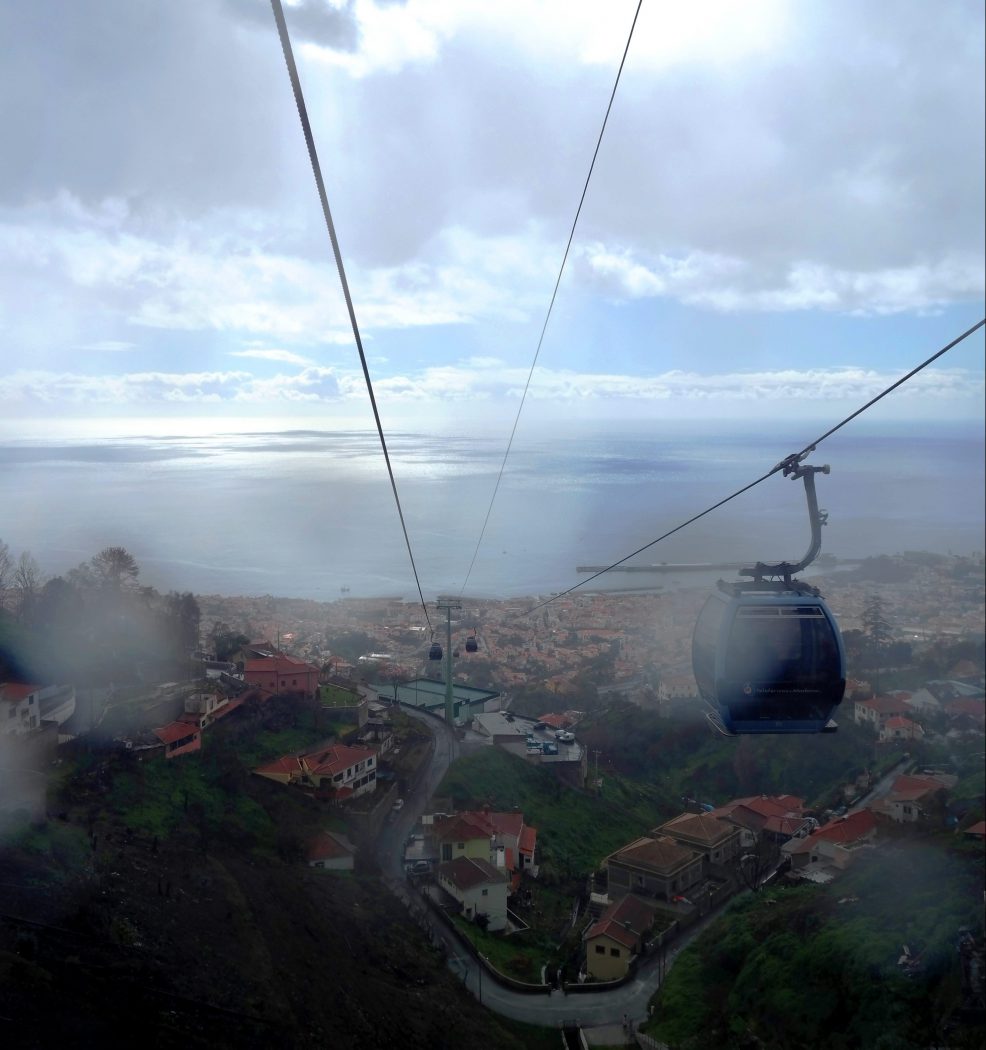 Cable car up, sleigh ride down

A cable car 560 runs meters up the mountain to Monte, a fashionable suburb where especially many rich British families used to stay during winter season. (The British have left a strong footprint on Madeira: They occupied the island during the Napoleonic wars, and British businessmen had great influence on Madeira’s economy for centuries). 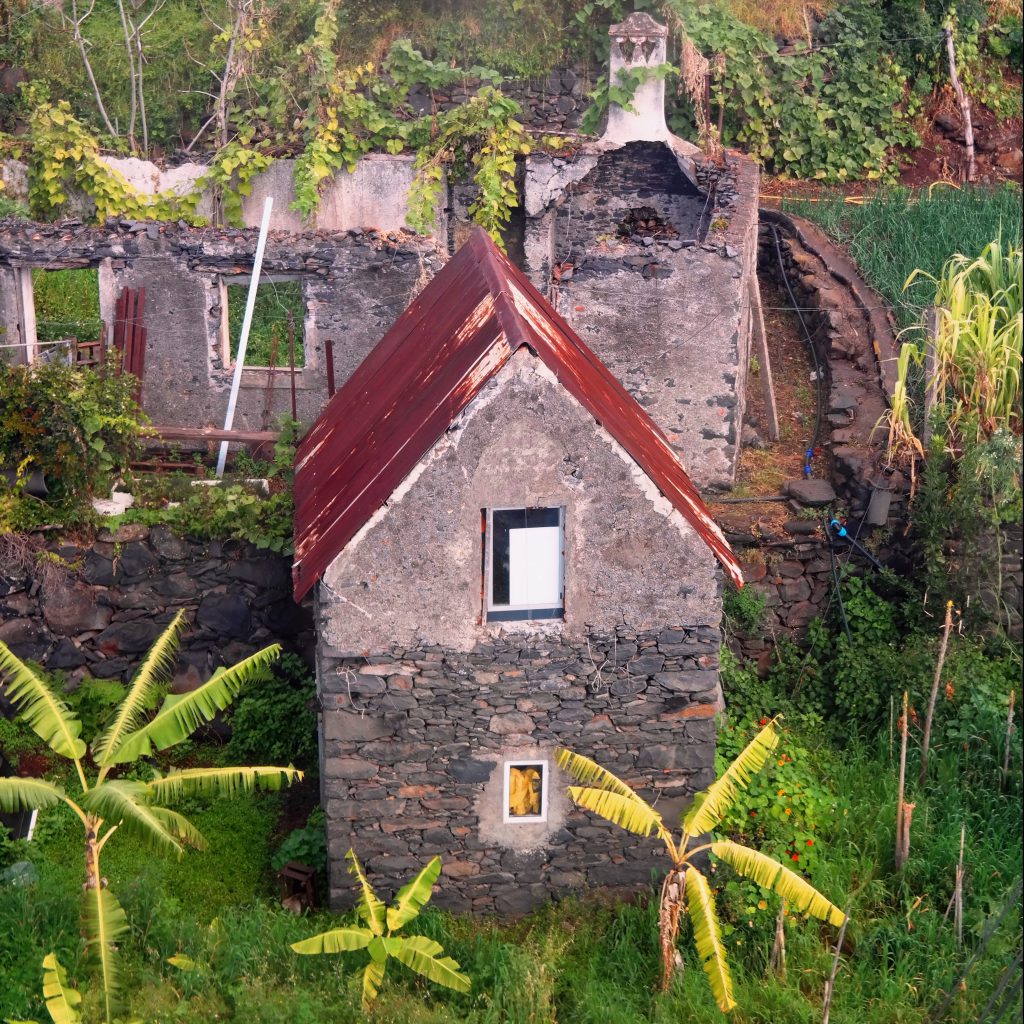 From the cable car, we enjoyed the view over Funchal’s identical colored rooftops, but we were puzzled to see so many burned houses and trees. Afterwards, I found out that in 2016, Madeira was hit by a wildfire which, according to nytimes.com, destroyed 150 homes and killed three people. 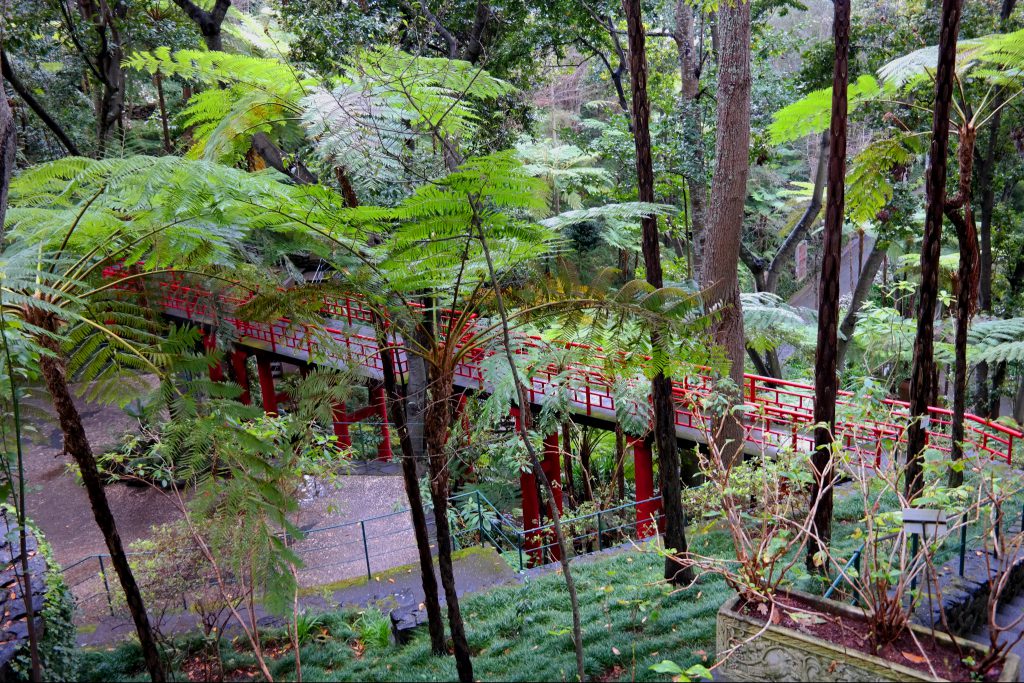 The Tropical Garden in Monte might sound boring for teenagers. Nevertheless, we all enjoyed an hour’s walk in the peaceful  garden with photo shooting and a glass of Madeira wine (included in entrance fee, of course). 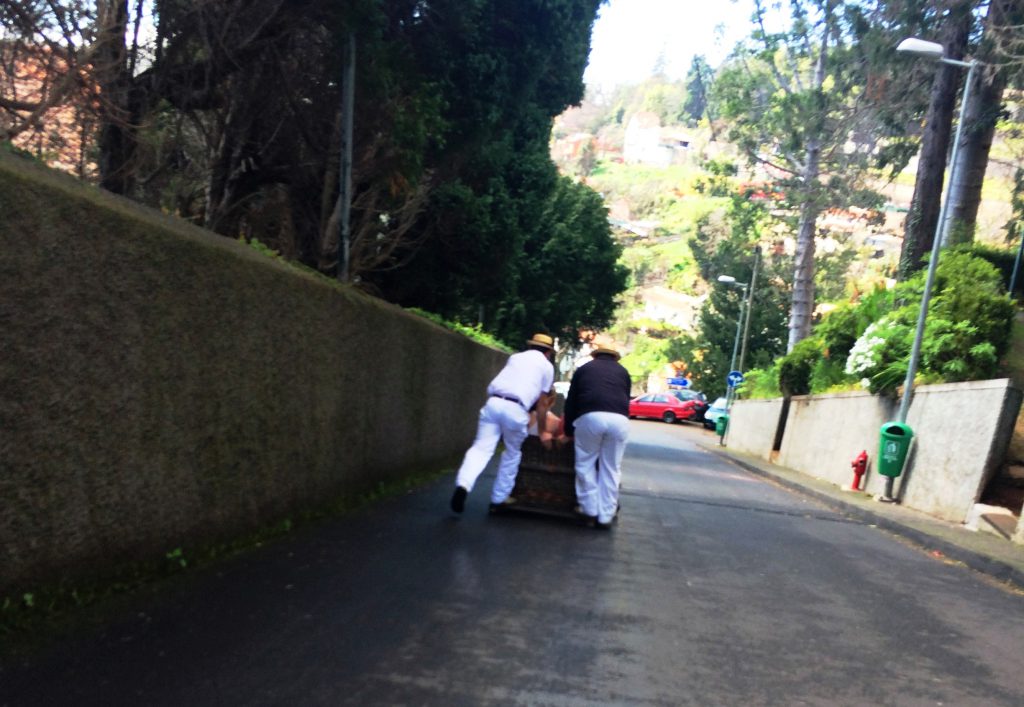 We also had to try a “Toboggan” sleigh ride from Monte down towards Funchal: A strange, fun, and breakneck activity: You sit in a braided armchair on waxed runners, controlled by two drivers. The tour distance is 2 km and lasts 10 minutes. From there, you have either walk or grab a taxi the last stretch down to Funchal.

Hotel with a history 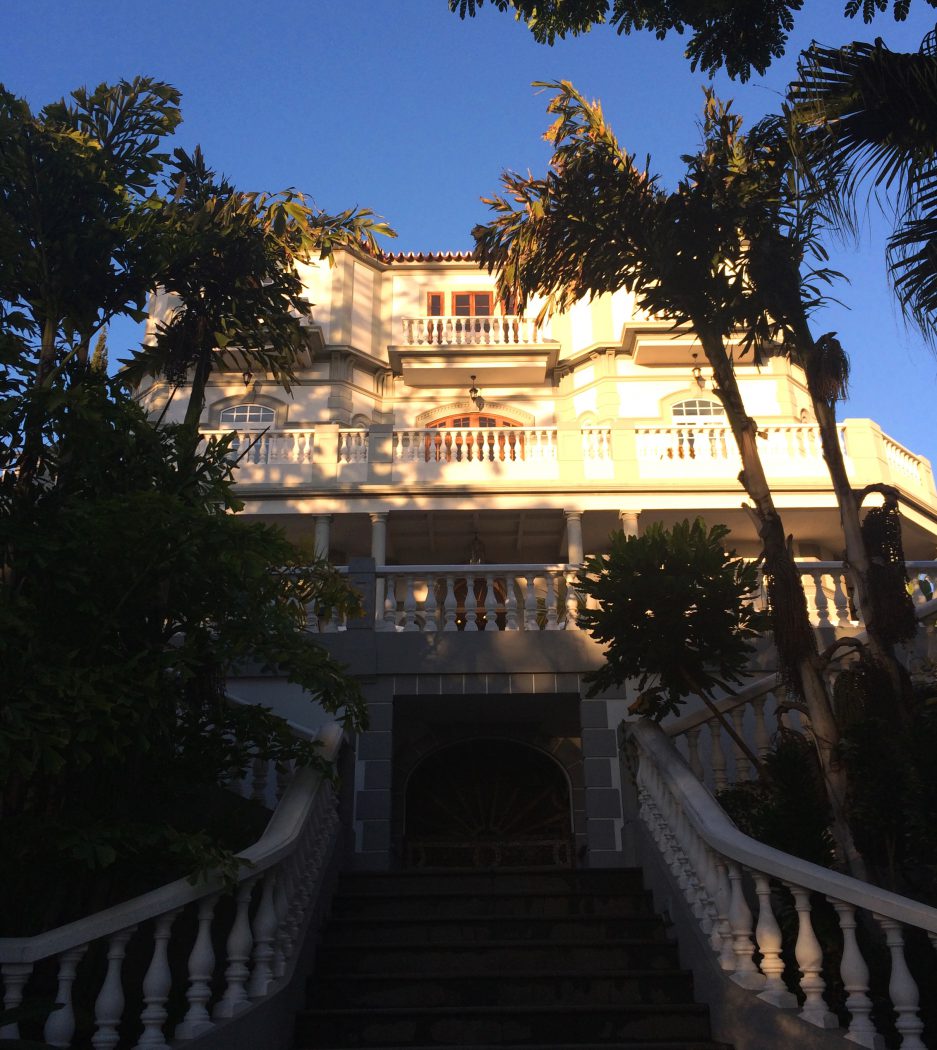 We stayed at Hotel Pestana Miramar, 10-15 minutes’ walk from the center of Funchal. Our “spring room” was in the old mansion, which was decorated with classical furniture and oil paintings. 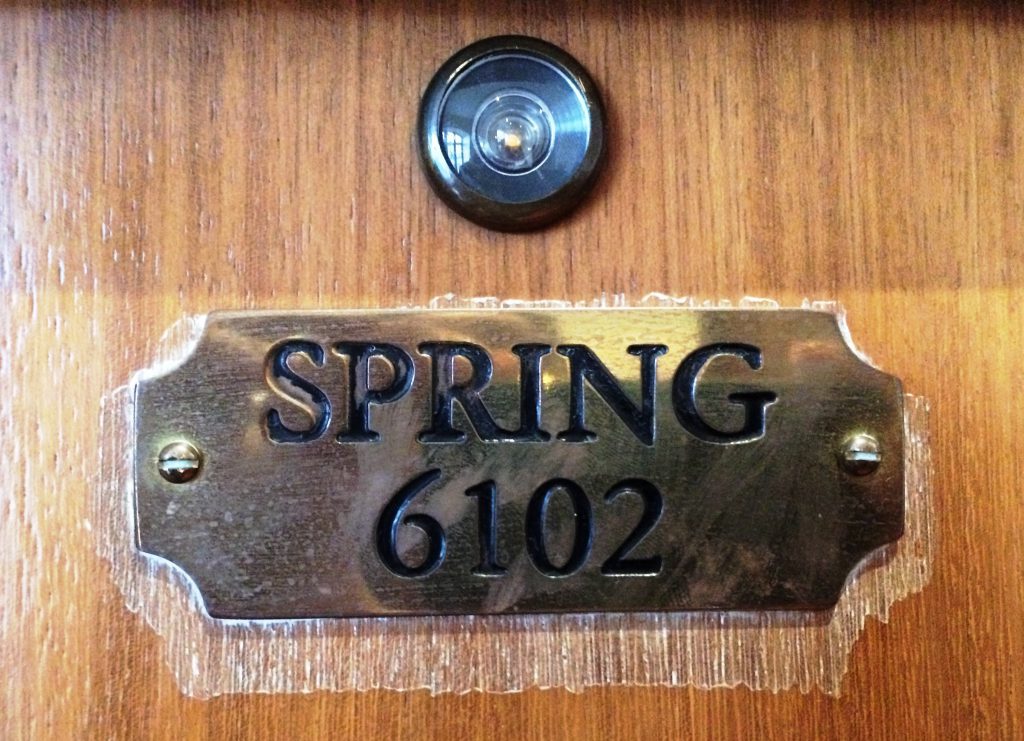 To our surprise, several of the paintings were Danish, and a staff member told us the story: The original owner of the mansion was a shipping magnate, and at that time it had been a custom among ships owners to exchange paintings when docking in foreign harbors. 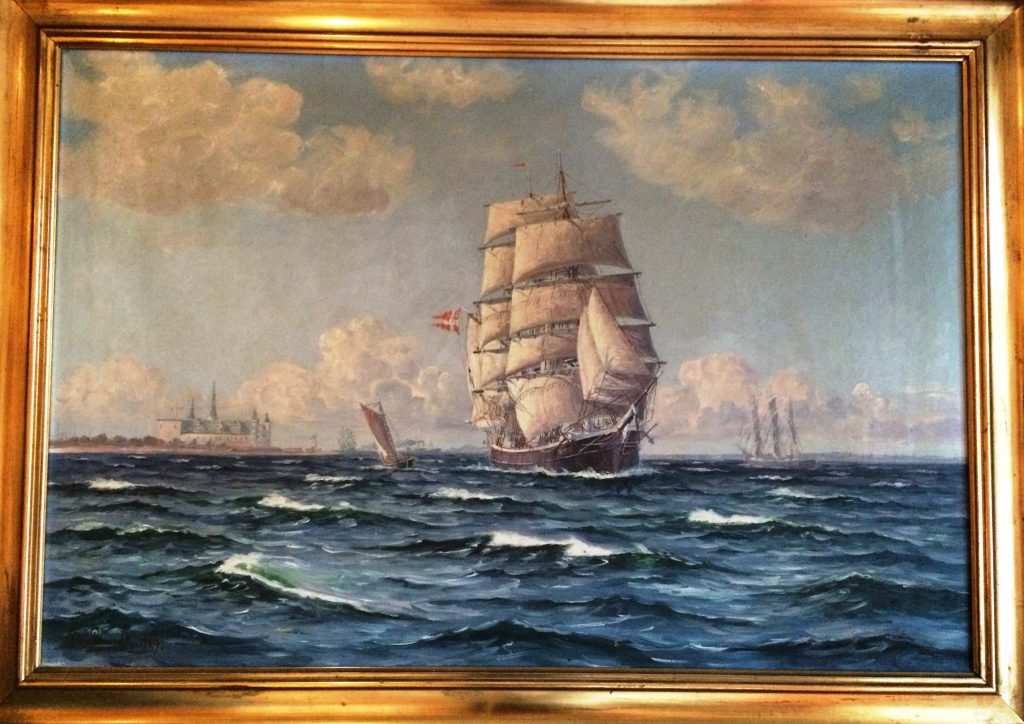 We had plenty of space both on our private terrace, in the (ice cold) pool, and in the gym (another benefit of a pensioner holiday destination). In fact, other tourists’ whereabouts were a bit of a mystery to us: Although we arrived on a full plane from Denmark, streets were never crowded, and there was no need to book for dinner. Had tourists got lost in the cloudy mountains? Probably not. Our plane home was full. 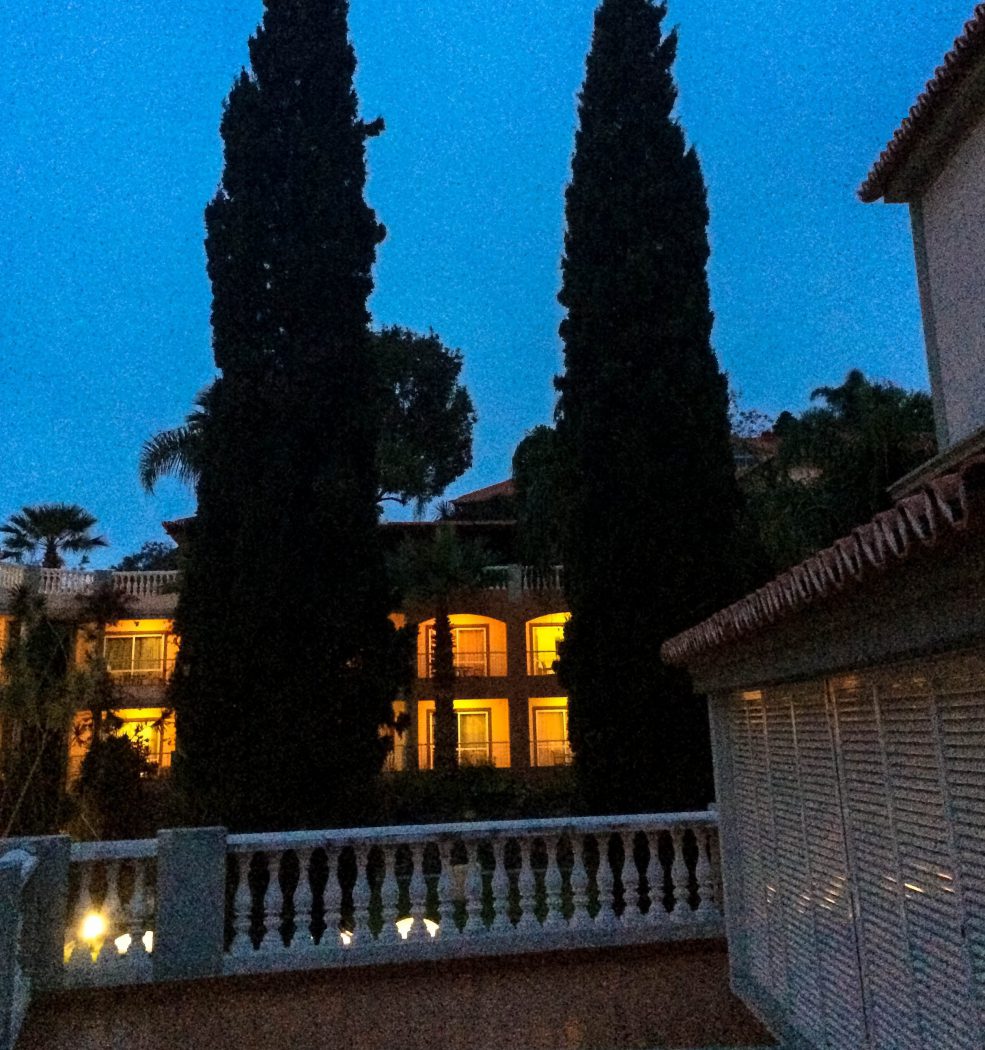 If we ever get a chance to visit Madeira again, I hope it will be during Carnival: We saw them setting up decorations, and the Carnival started only five days after our return!!

Another reason to go back is to visit Madeira’s little sister, Porto Santo island. It can be done as a day trip by ferry. We might even catch a glimpse of whales and dolphins on the way, since both are common to see in the waters of Madeira. 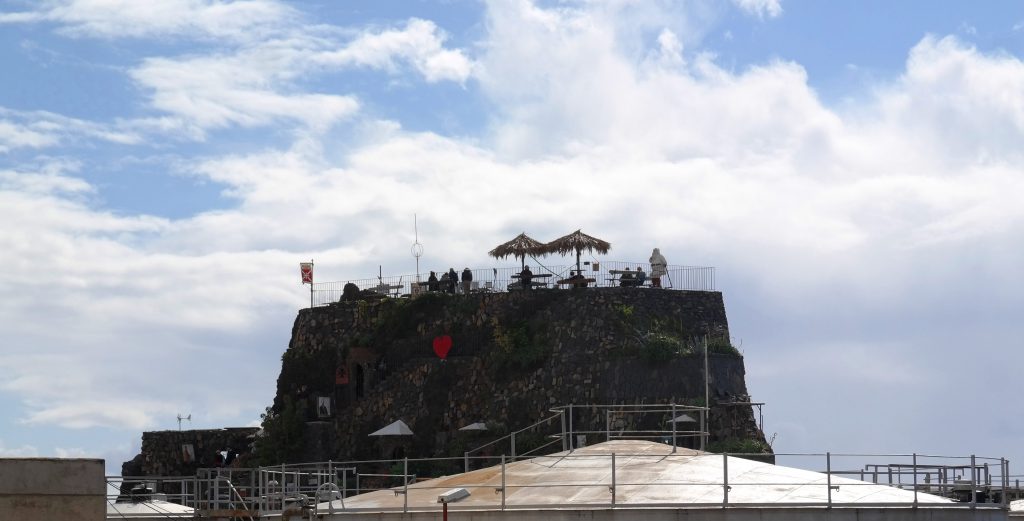 More photos from our trip here

Have you read my blog post on the French island Réunion?