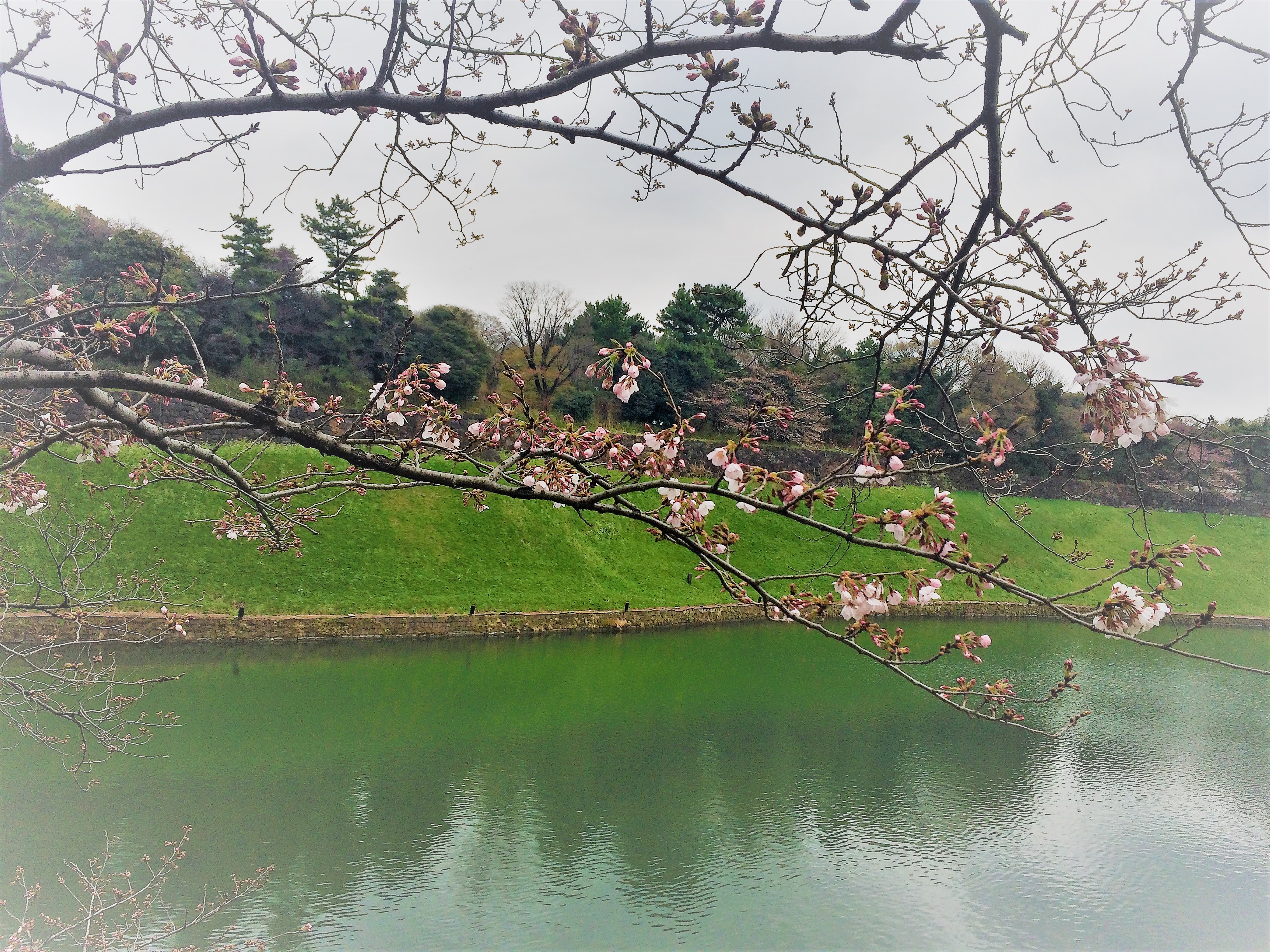 This was our second visit to Japan. It was April and cherry blossom festival in Tokyo and Kyoto, but this time we wanted to see something else. So, we booked a car. After 11 hours flight from Europe, we spent half a day and a night fighting jetlag in cherry blooming Tokyo. Had some lovely sushi, a stroll in the Imperial Palace East Garden, and – after several obstacles – a swim in the hotel pool: (no bikinis, no jewelry allowed, bathing cap compulsory!)  Next morning we went to pick up our rental at Nippon RentaCar. 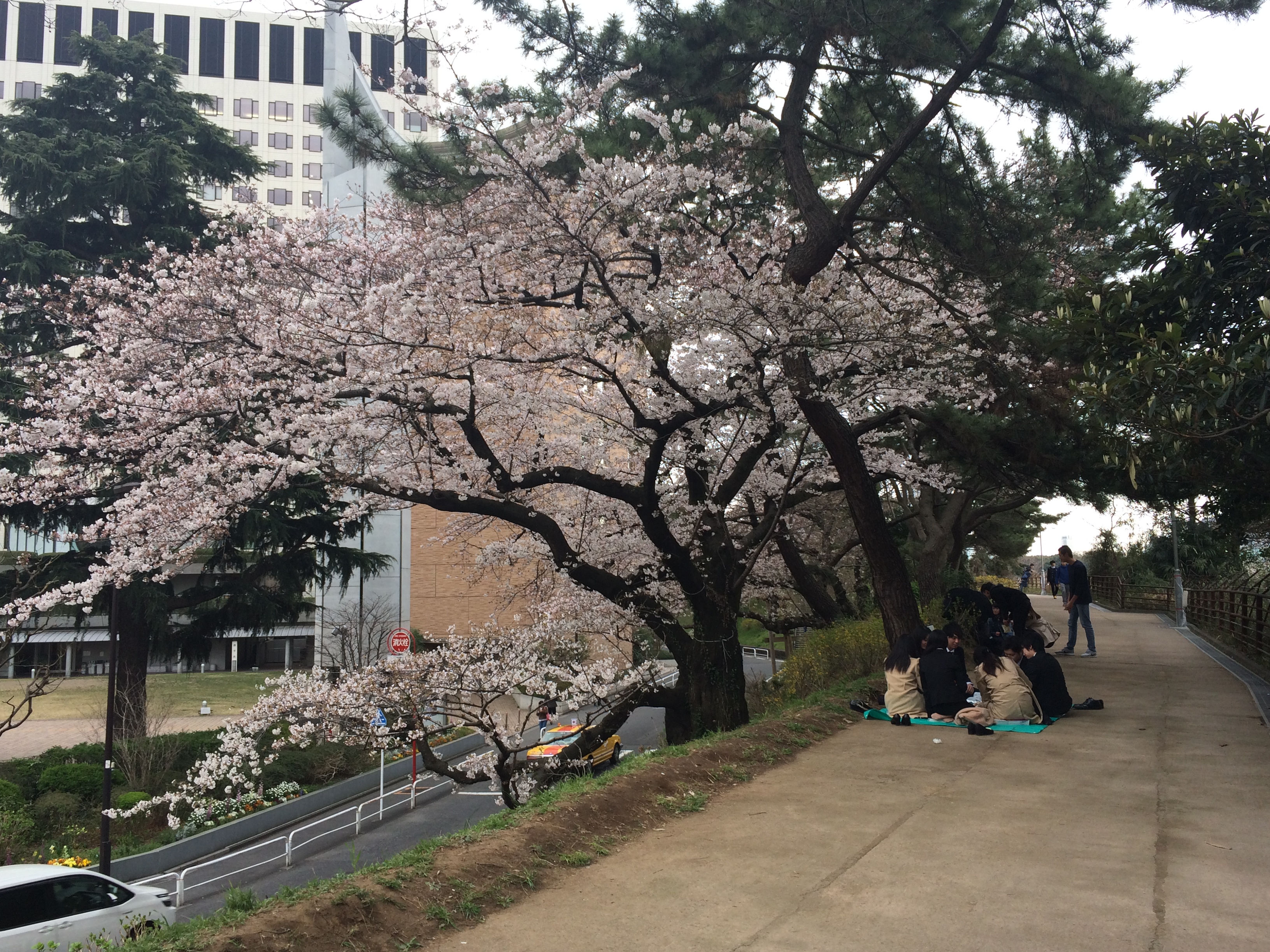 Our destination was Hakone national park, favorite holiday spot for many Tokyo citizens, 100 km from Tokyo at the foot of Mount Fuji. It is a mountainous area with hot springs, ‘onzens’ (baths), cruises on Lake Ashi-no-ko, golf courses, ropeway, cable-car, shrines, and several art museums. 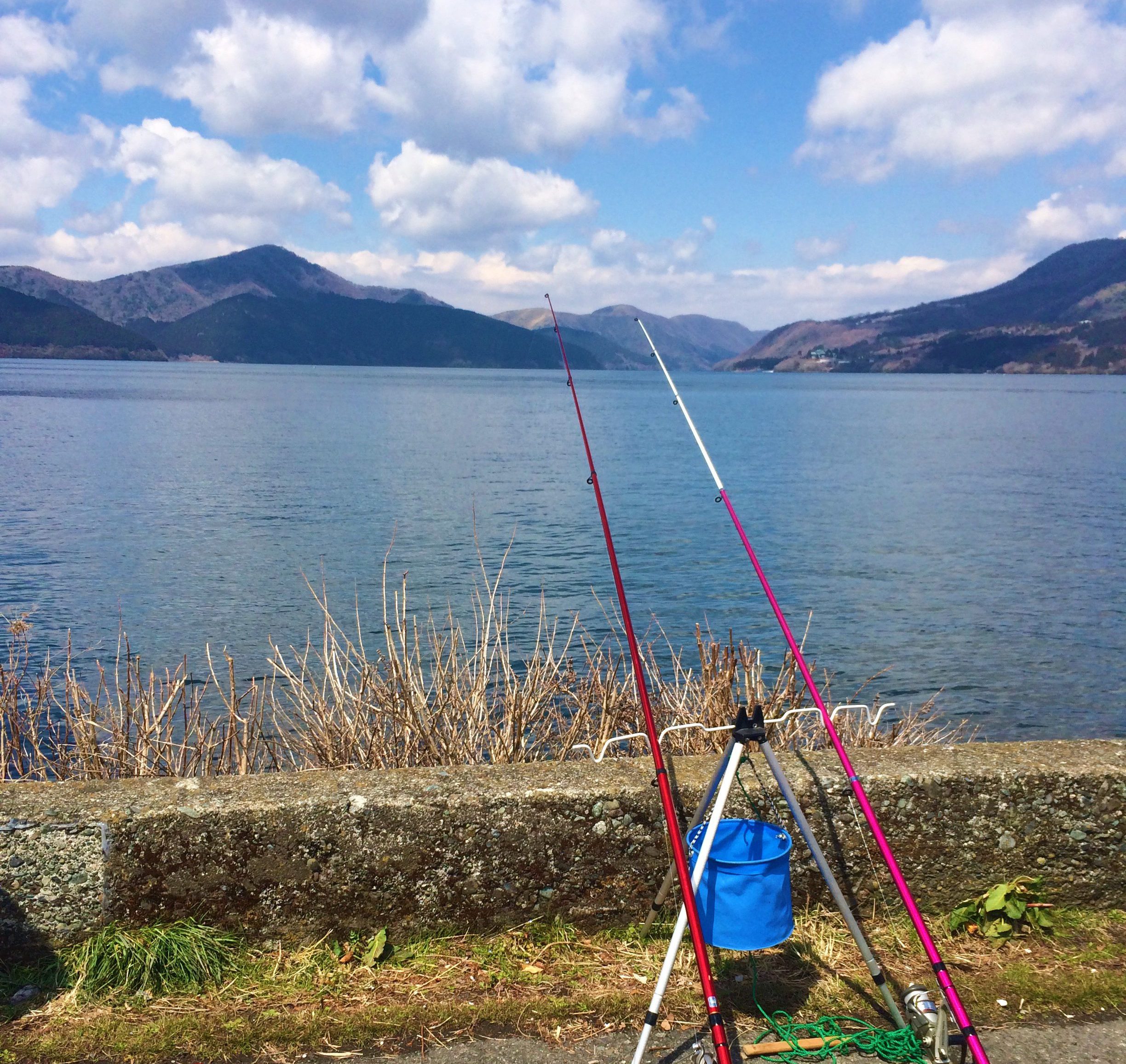 We left the car rental office in Tokyo, my husband in the driver’s seat. After 800 meter, the police stopped us. (Policemen stand on practically every street corner, directing traffic vigorously with whistle and stick). Luckily, the police was content with seeing my husband’s European passport and driving license. We did not show his international driver’s licence from 1996. A police officer noted something in a book and explained to us in poor English that we had moved too early into a turning lane. Then, he smiled and wished us a good day. I love Japanese politeness. 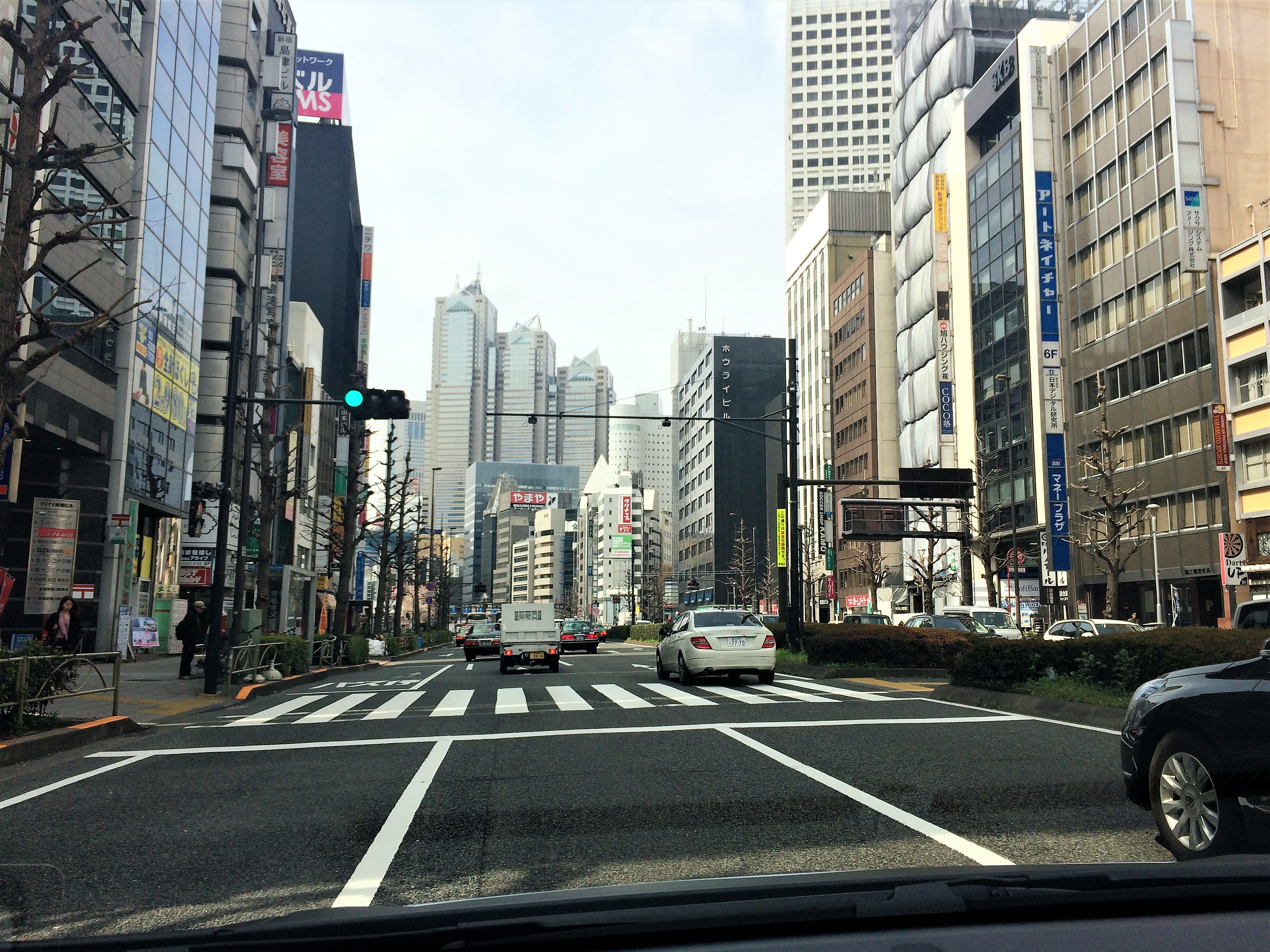 We headed straight to the motorway, and all went fine, until we got stuck in a traffic jam for an hour. We knew that Hakone was a popular weekend destination, but we had not expected so many Tokyo citizens to go on a Sunday! Well, it turned out they didn’t: Most cars turned off at the next exit, phew… By the way, driving on Japanese highways can be costly. We paid a total of 160 DKK/22 EUR for a stretch of 80 km. And luckily, we had cash, because not all toll booths accepted credit cards. 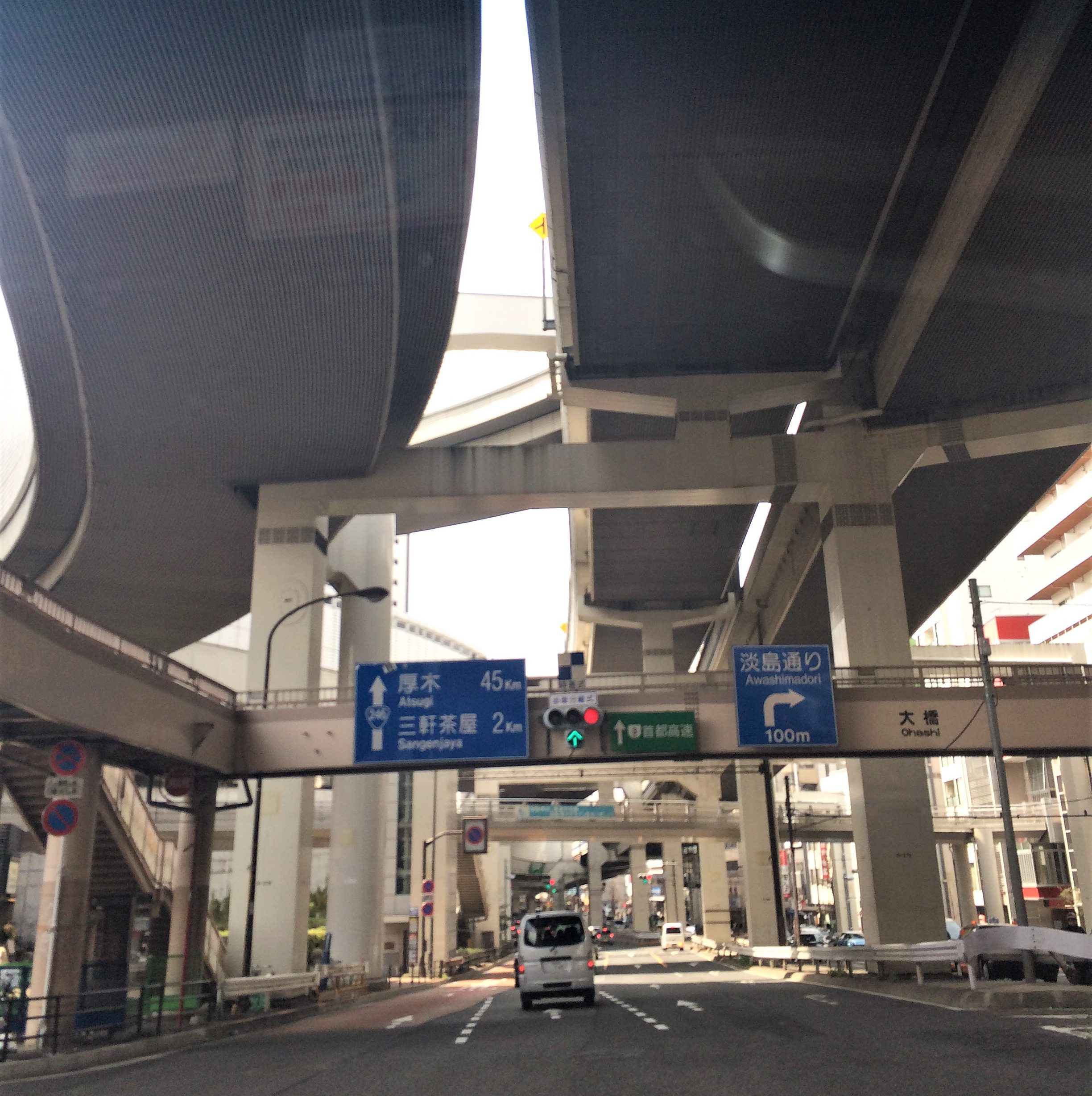 Part of our reason for going by car rather than train was to experience the countryside and towns along the way. However, what we saw through our car windows did not tempt us to spend more time on towns in this area: Unattractive concrete buildings with no link (as far as we could see) to the tradtional Japanese wooden houses with tile roofs and bonsai gardens. 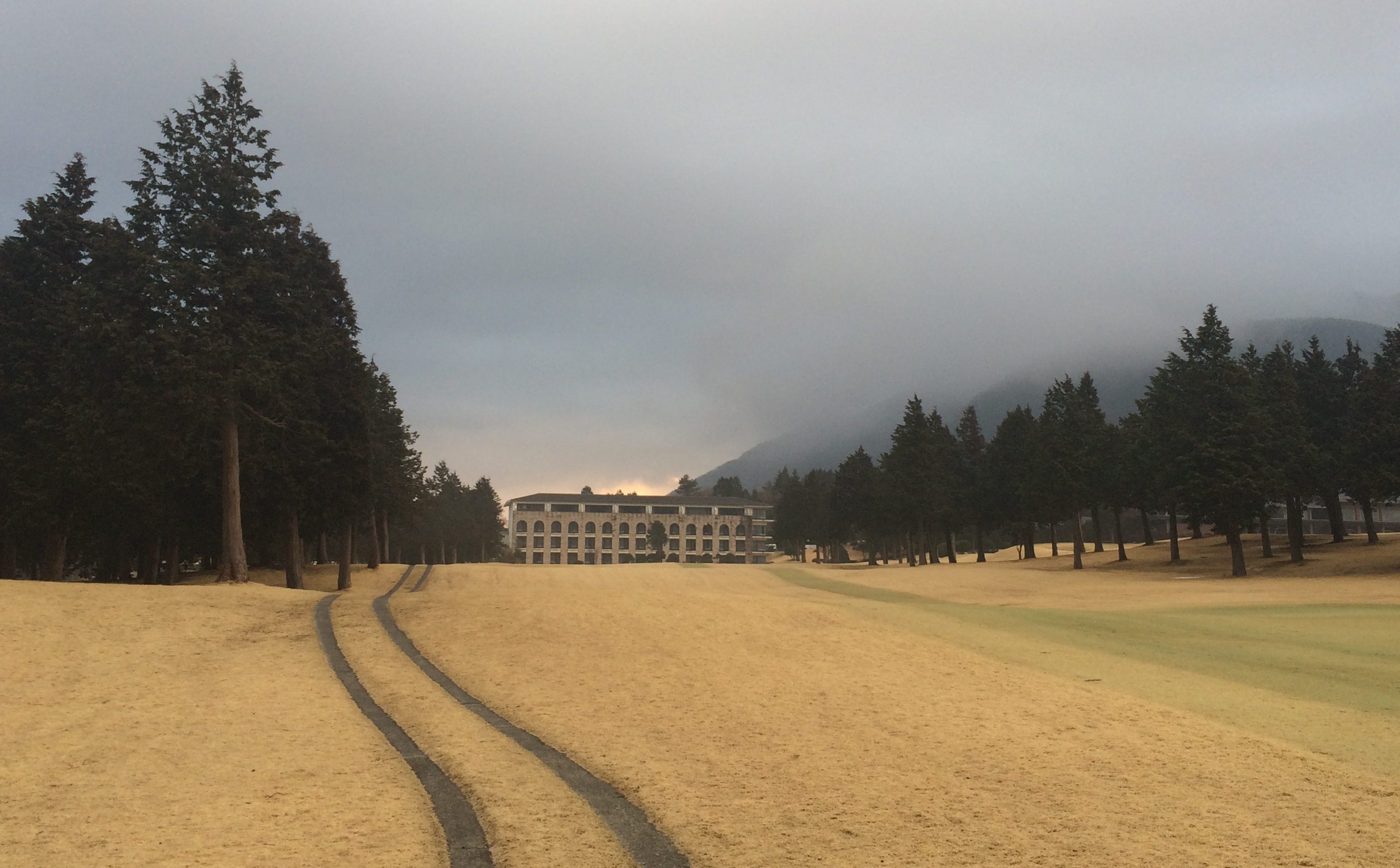 There was snow in Hakone, and the damp cold surprised us: I normally link Asia with warmer temperatures. We checked in at Hakone Sengokuhara Prince Hotel, a golf hotel with mountain views. Here, we gave the receptionist a headache because we had booked a triple room for the two of us. The receptionist staff discussed the matter in low voice, and kept asking us to wait 5 minutes. As we sat waiting, my mobile rang: It was a Japanese lady from booking.com. She had had a call from the receptionist and wanted to know if I would change my reservation to a double room at reduced price? I explained that we had deliberately booked a triple room and that we accepted the price. The moment I hung up, the receptionist gave us the keys! He had been listening in on my conversation. 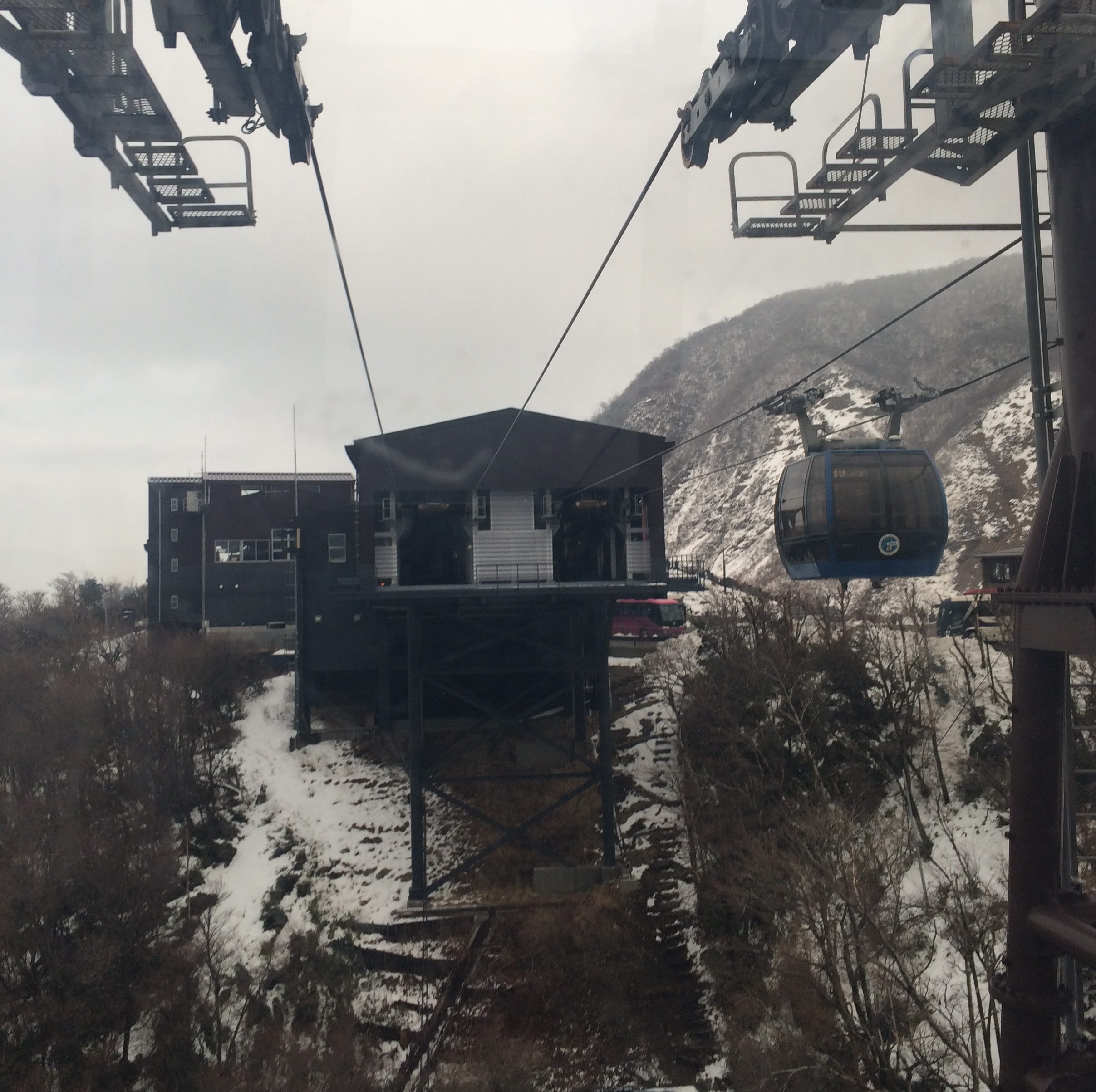 We explored the area by car, cable car, ropeway, and bus. In the evening, we dined in a restaurant close to the hotel, where we had a small discount because they didn’t accept credit cards, and the bill turned out to be 200 YEN more than our cash reserves. ATMs are widely used (there was one 50 meters from the restaurant), but far from all take foreign credit cards. 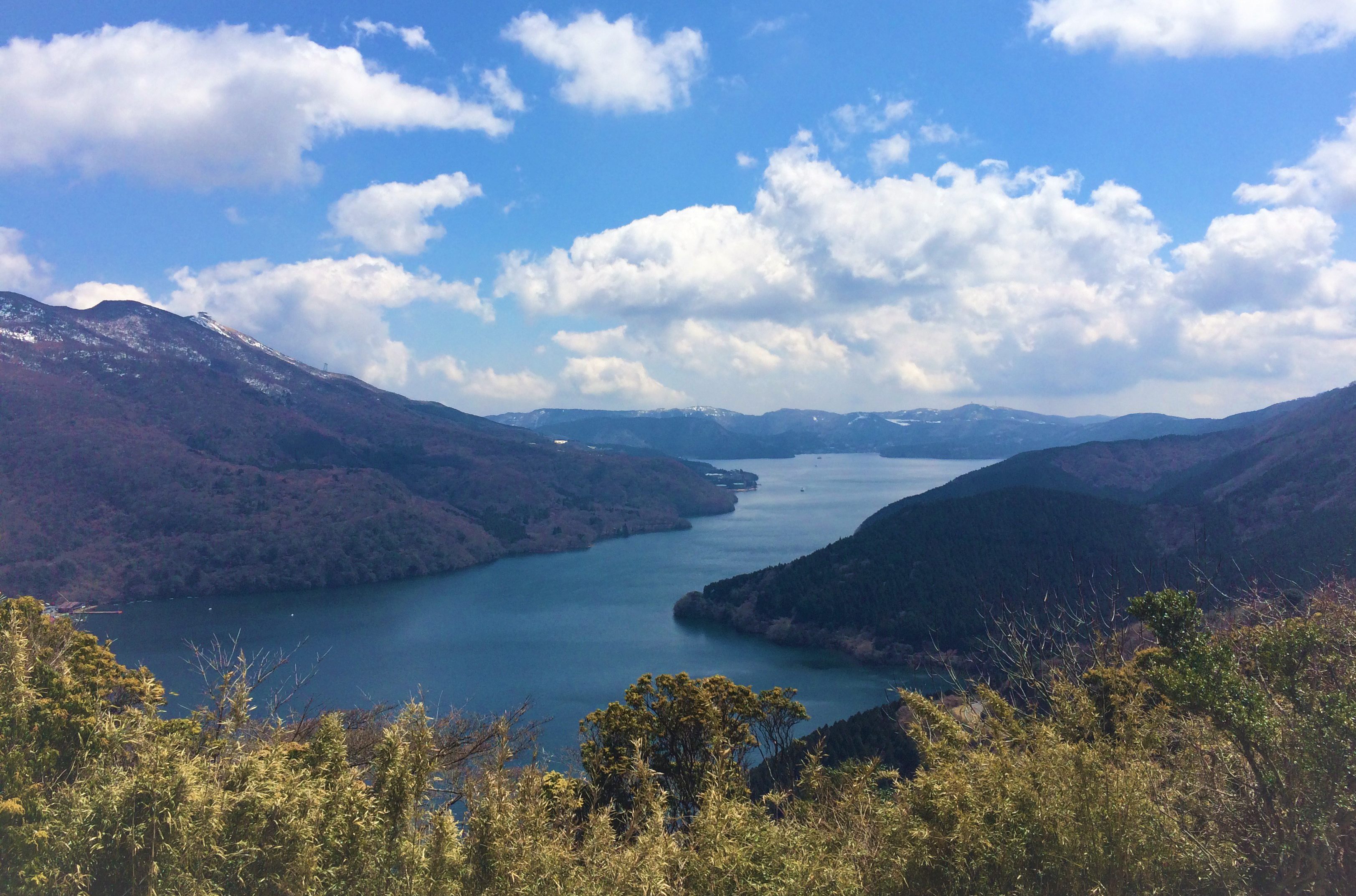 The hotel was located 3 km from Lake Ashi, and we asked the hotel staff if there were a hiking trail to the lake? They pulled out a map, on which we found a path and a bridge crossing a stream on the golf course. However, the staff told us we could not cross the bridge. Instead they suggested us to take a bus! At six o’clock next morning, we jumped the fence to the golf course and crossed the bridge. We found the hiking trail, but this time the fence was too tall to jump. Nevertheless, we had a beautiful sunrise hike on the golf course. 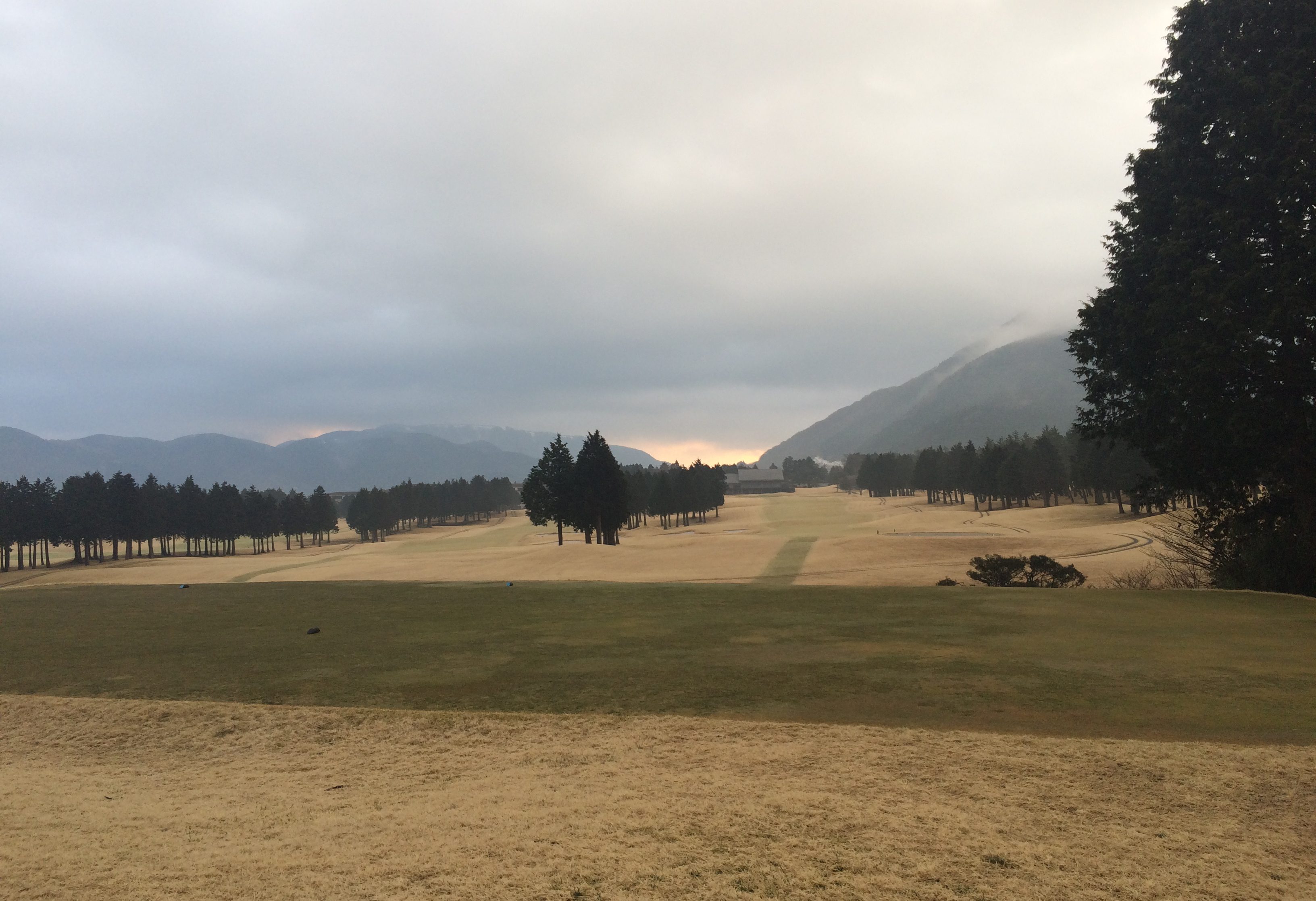 After breakfast, we checked out and drove on along the lake, heading for Mount Fuji. Finally, the top of the mountain appeared between clouds, and I jumped out to take a photo. Didn’t quite make it, hmmmpfff. 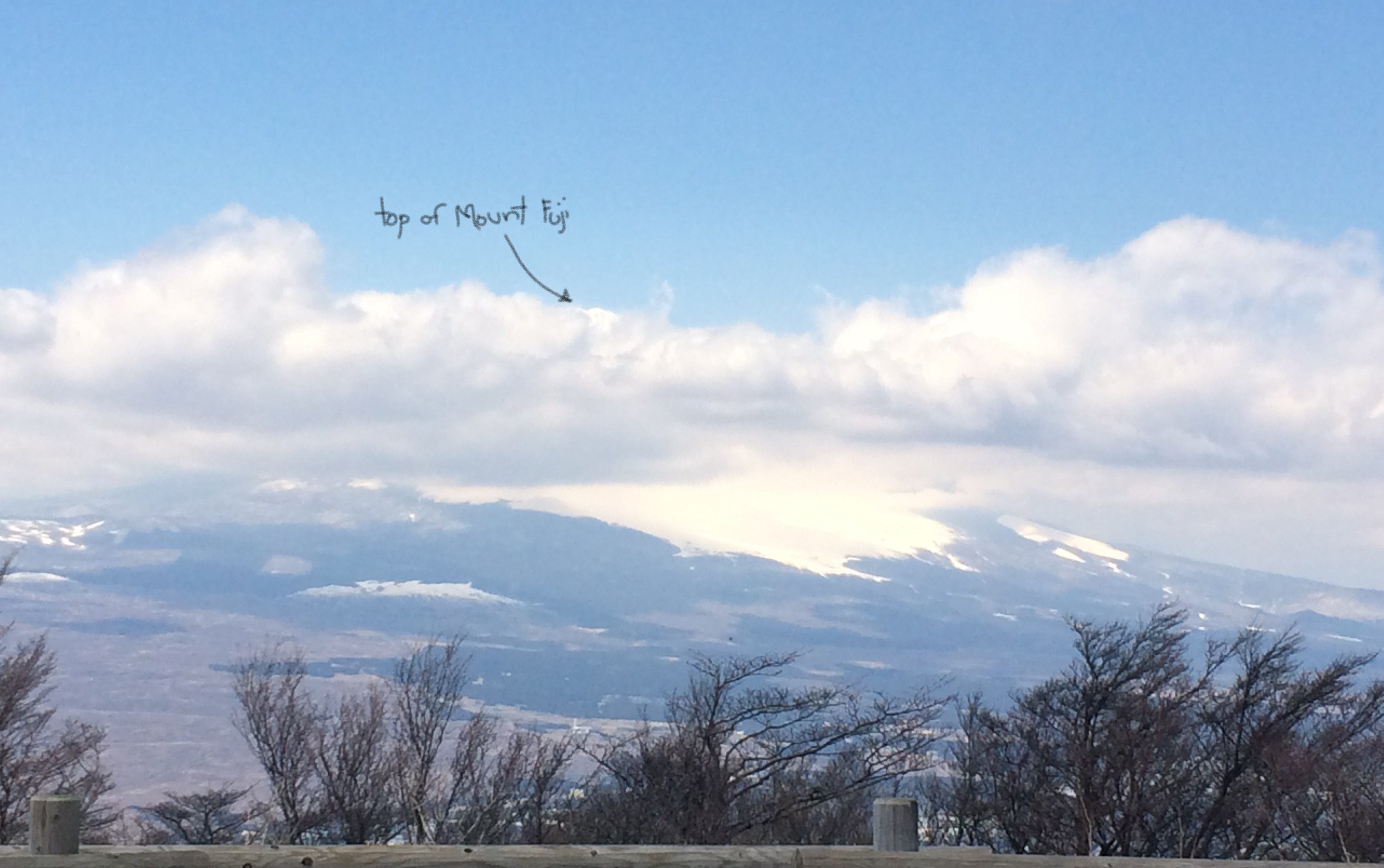 Our trip back to Tokyo went smoothly. We followed the flow and ran a lot faster than the 80 km someone had told us was the speed limit. Back in Tokyo, we check in at New Otani, a large hotel with a lovely Japanese garden. We particularly appreciated the executive lounge with champagne happy hours! 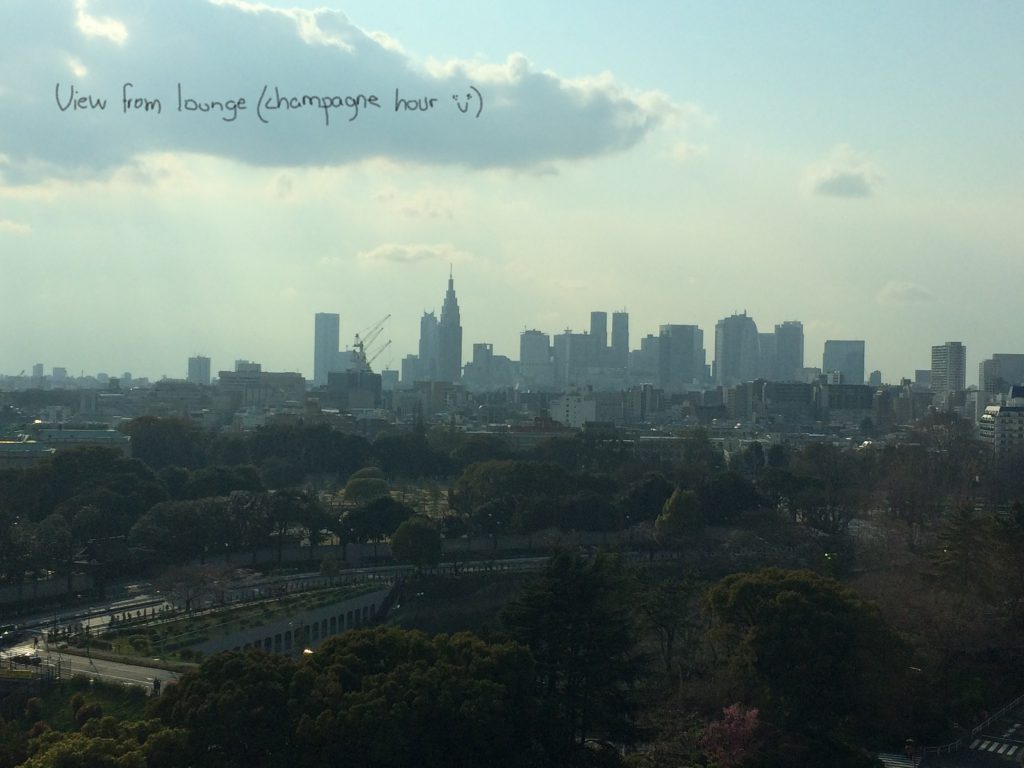 Monday night, after a ridiculiously-expensive-but-very-nice Kobe beef dinner in one of the hotel restaurants, we strolled downtown to a lively near-pedestrian street with colorful neon lights and Japanese people in suits and trench coats. 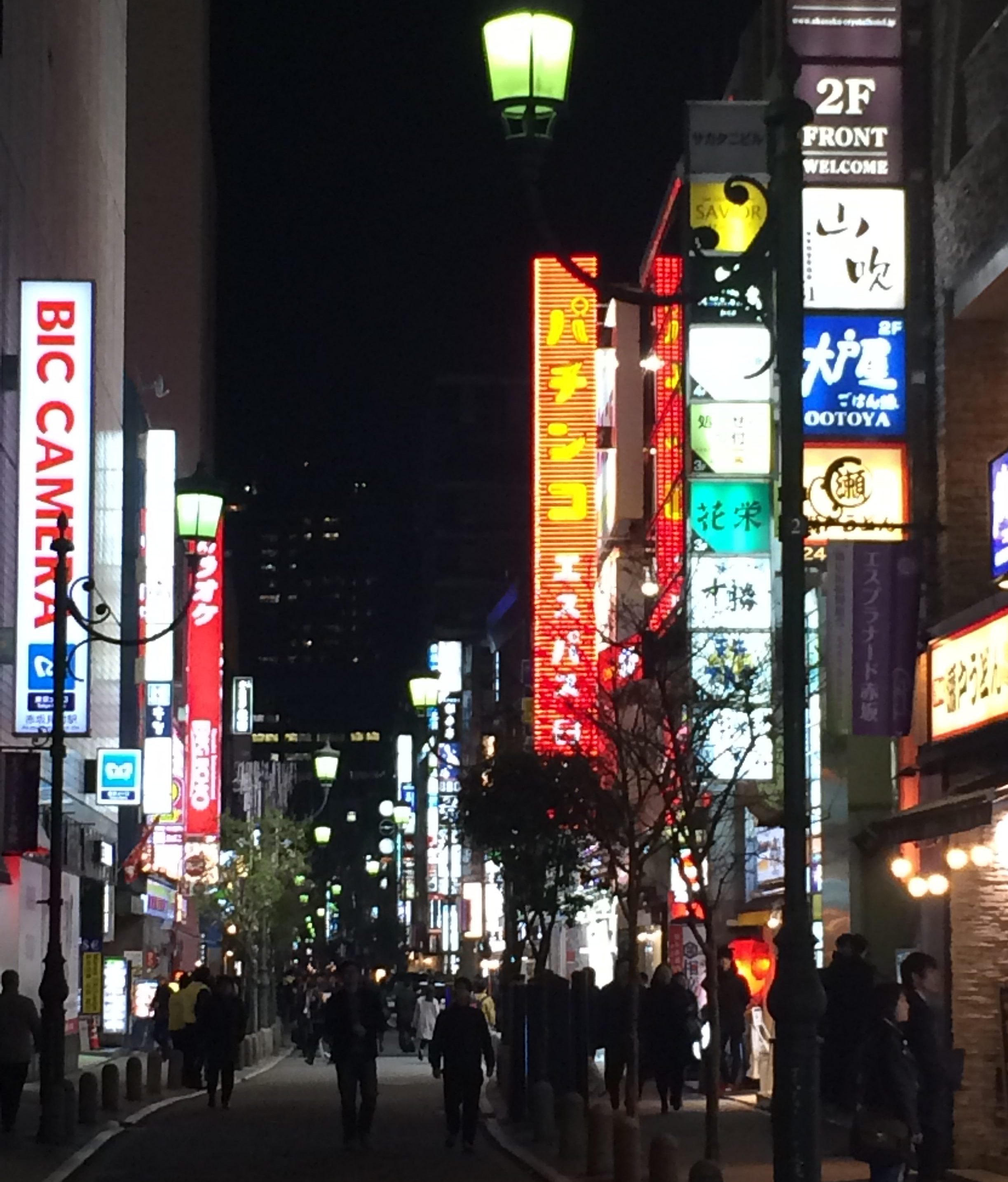 We spotted a games room and went in. There was an inferno of noise. People sat side by side starring into game machines. Each person fed his machine with money and pressed one button, then the machine blinked and balls rolled. Nothing else! It was an Aha! experience for us. Opium of the people. We failed to understand the attraction. Apart from the fact that, for once, smoking was allowed. Just take a look at the satisfied facial expression on the smoker below! 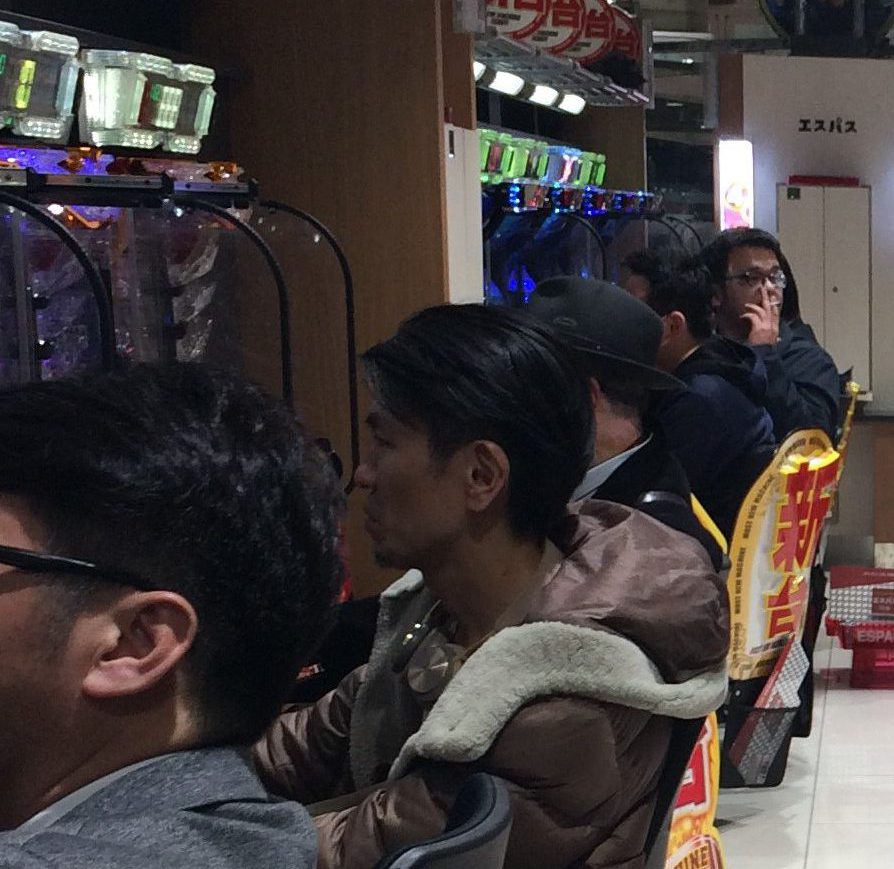 If labor inspection authorities (as we know them in Denmark) had stopped by, the place would have been closed immediately. 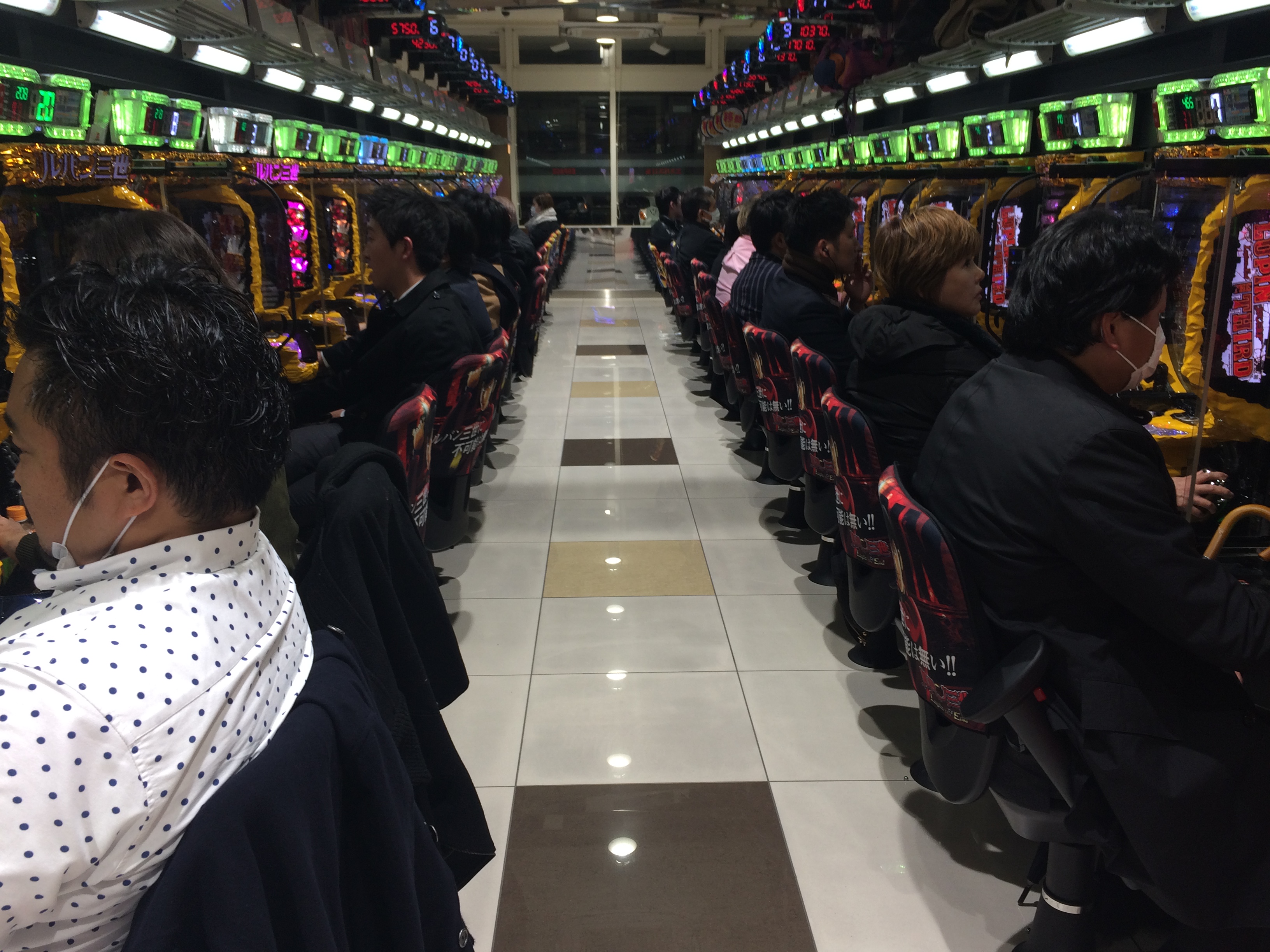 The next morning, a long weekend in Japan was over, and I jumped on a shuttle bus and waved goodbye first of all to my husband, but also to the politely bowing hotel staff, before driving through cherry blooming Tokyo to the airport. 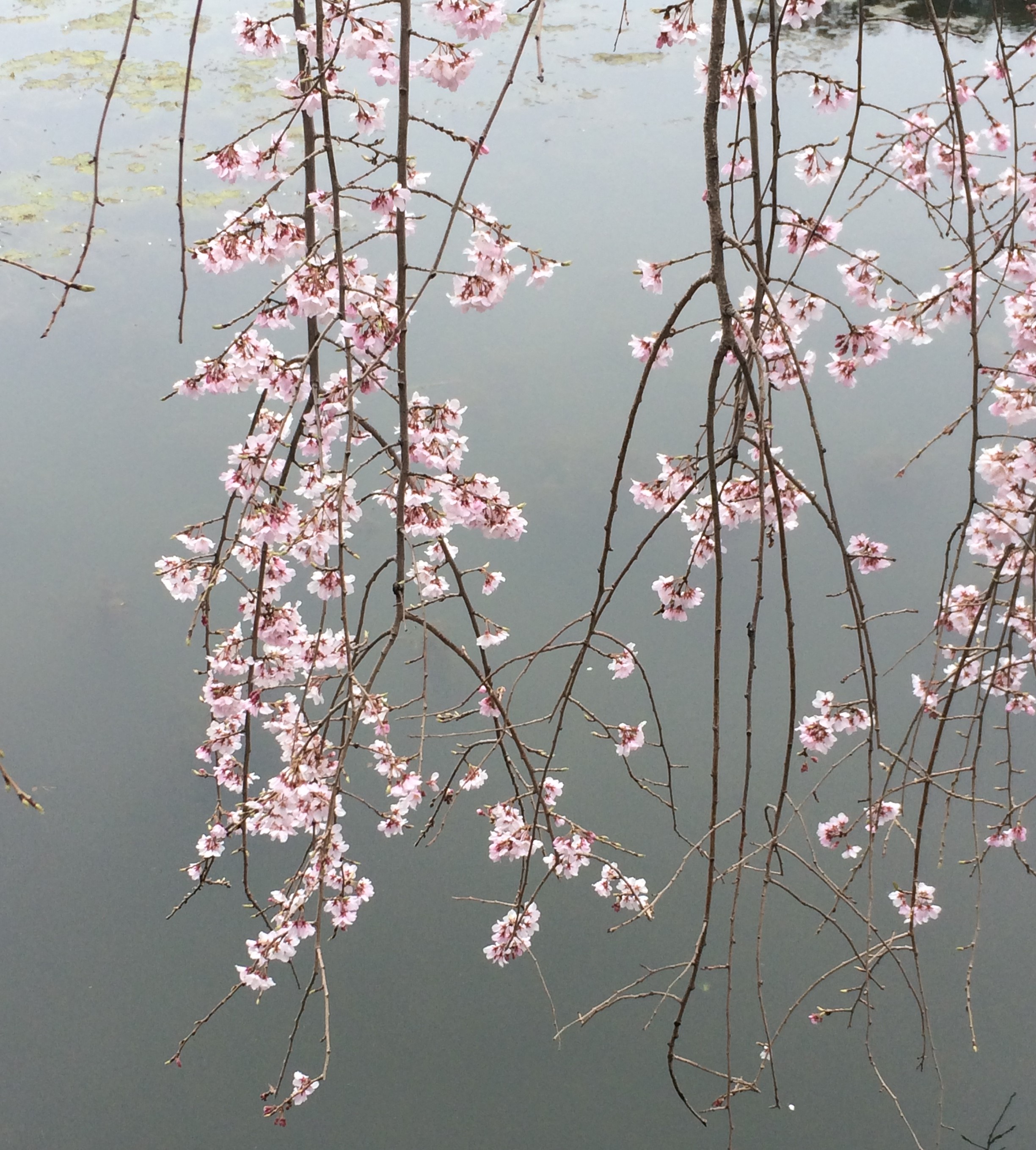 Read about my first Aha! experiences in Japan