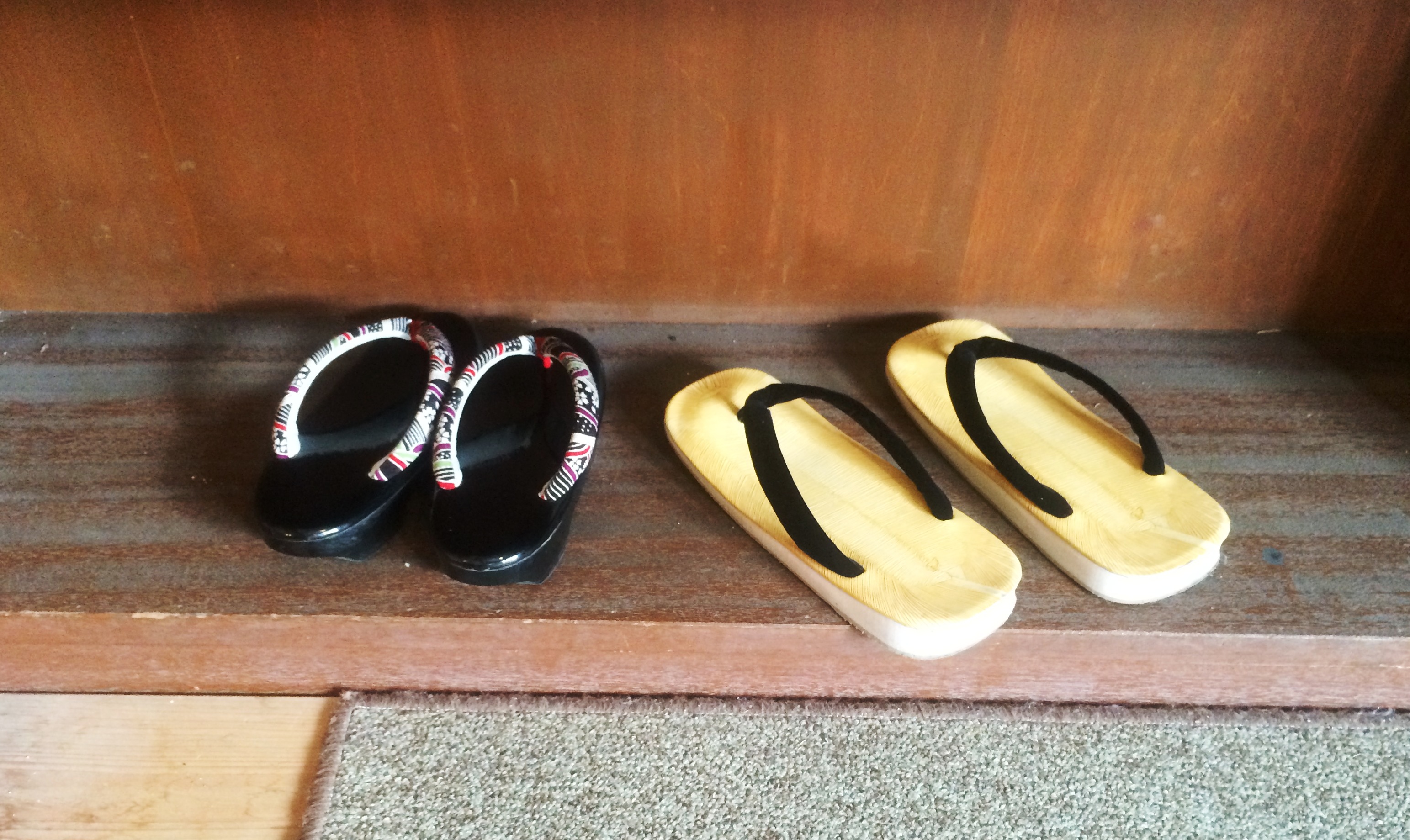 Slippers provided by our Kyoto hosts

Japan recently moved up my list of interesting travel destinations.

Previously, I associated the country primarily with advanced consumer electronics, skyscrapers, crowds, stressed-out school children, and sushi. But, last month I visited Tokyo and Kyoto with my partner, and we had at least thirteen Aha! moments in five days:

1. Tokyo is quiet and uglier than expected, with gray concrete buildings of different heights and odd shapes. It is unbelievably quiet and deserted for a city with 35 million inhabitants. Even on Friday night, where we stroll around in street level and underground, we meet surprisingly few people. 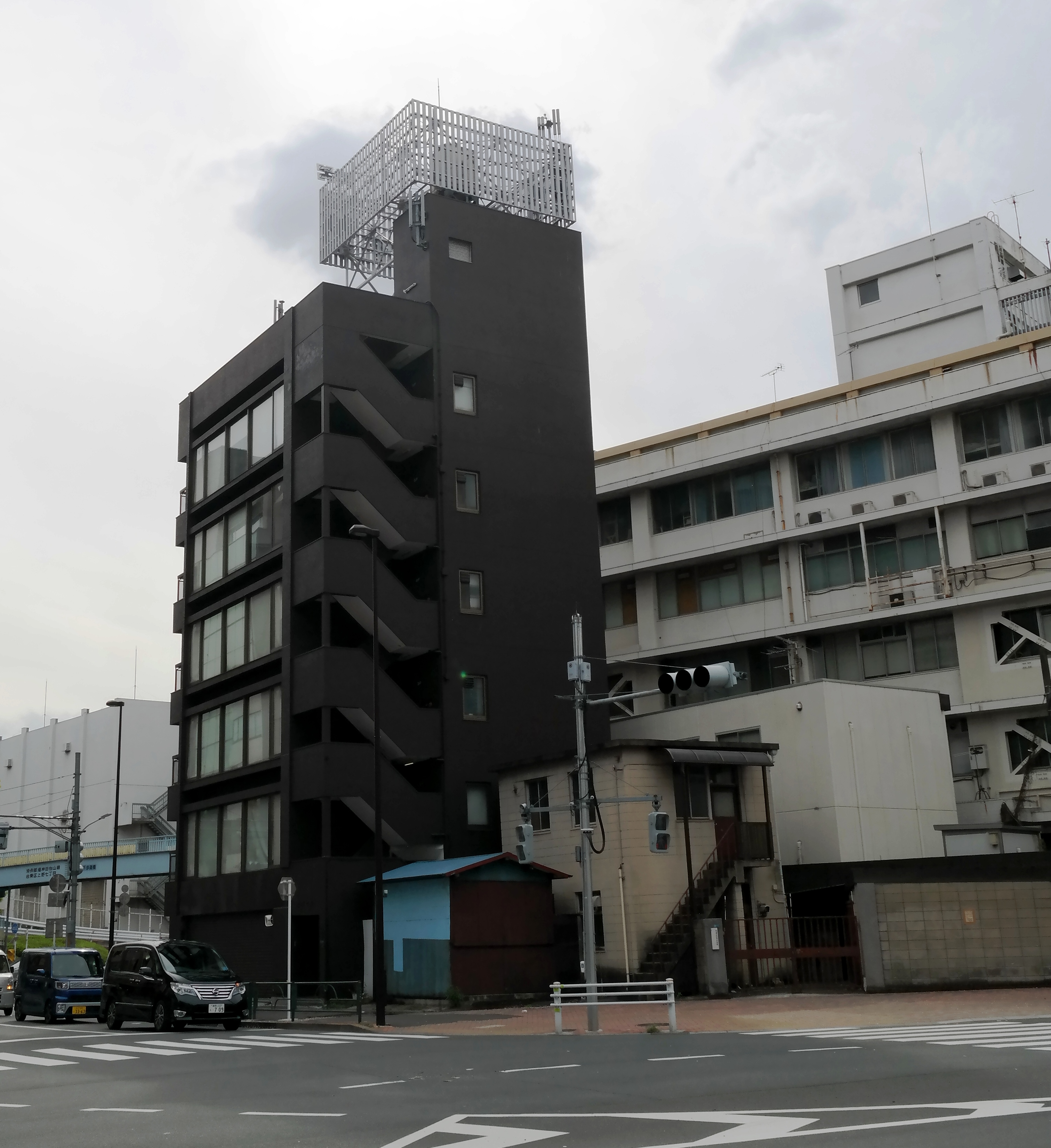 2. Japanese toilets are high tech. When I open the door to my toilet room, the seat opens automatically. Furthermore, the seat is heated and there is a panel with buttons to press if I want to rinse front or back or blow dry. And, it has automatic flush. My first thought is ‘this is a special hotel feature’. But I get to test several public toilets the following days, and they are both clean and have seat heating and various buttons and features, including a flush sound button, preventing neighbors from hearing farts! The Japanese seem persistent that toilet use should be a pleasant experience. (Although no odor remover button).

3. Picnic is popular, especially in April when cherry trees are blooming in parks. Blue plastic tarps are spread out, and all kinds of people, including businessmen in black suits, sit down and enjoy outdoor dining together. Shoes are removed and placed neatly in a row outside the blue plastic. 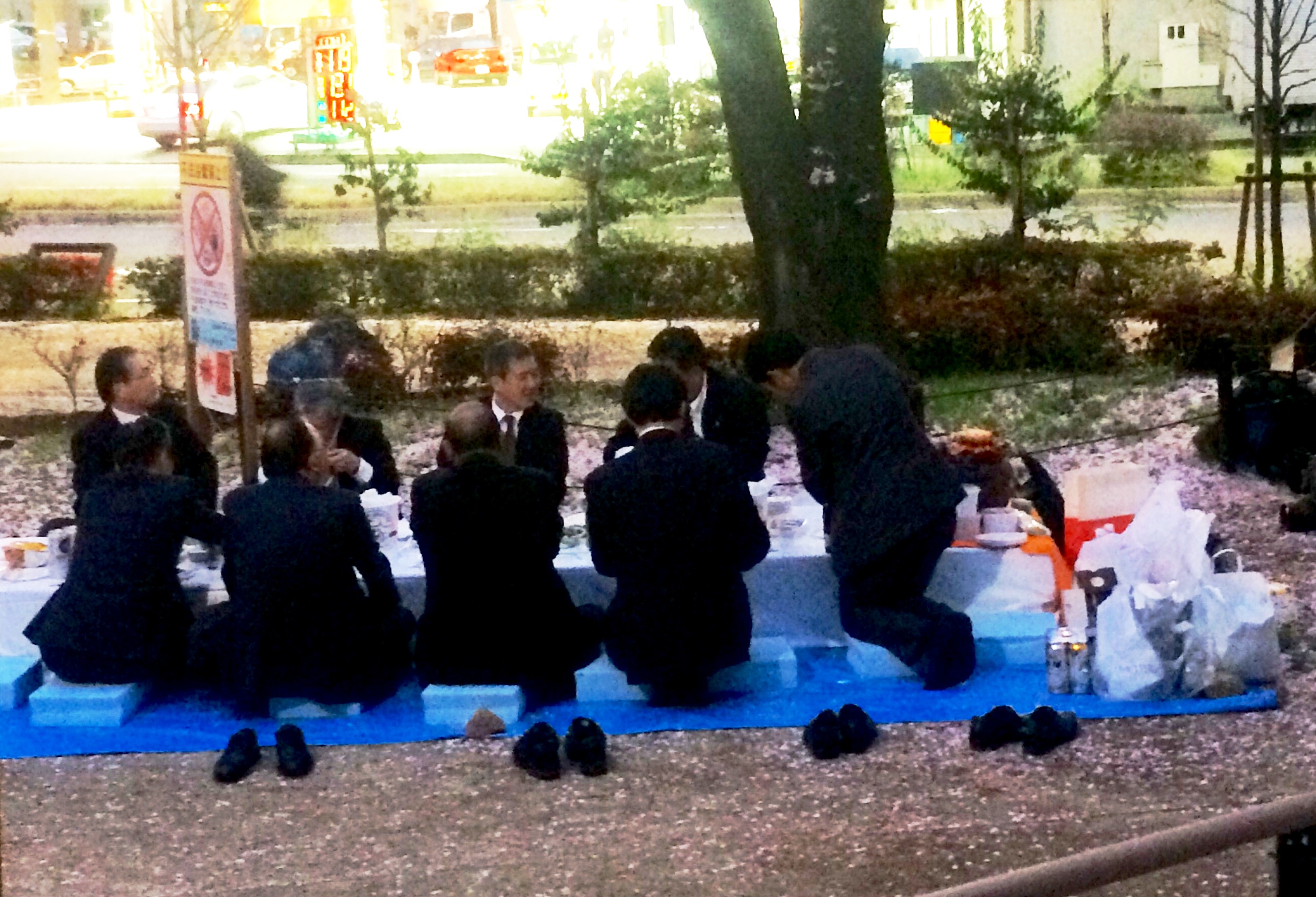 Men in suits on picnic in Tokyo

4. Litter bins are scarce. It is impressing how the Japanese manage to keep streets neat and clean when there are no public litter bins! Tourists are the only ones who dare to throw a piece of gum, and apparently, it is removed immediately.

5. Courtesy and service level are sky-high. Everyone constantly bows and thanks, almost as a reflex. in Shinkansen, the world’s fastest train, hostesses bow when entering and leaving each passenger car. At the airport, we see a plane get drawn in position by a small car, and then the driver steps out to bow and wave to the plane. We also see a girl bowing to the person she is speaking with on her mobile. 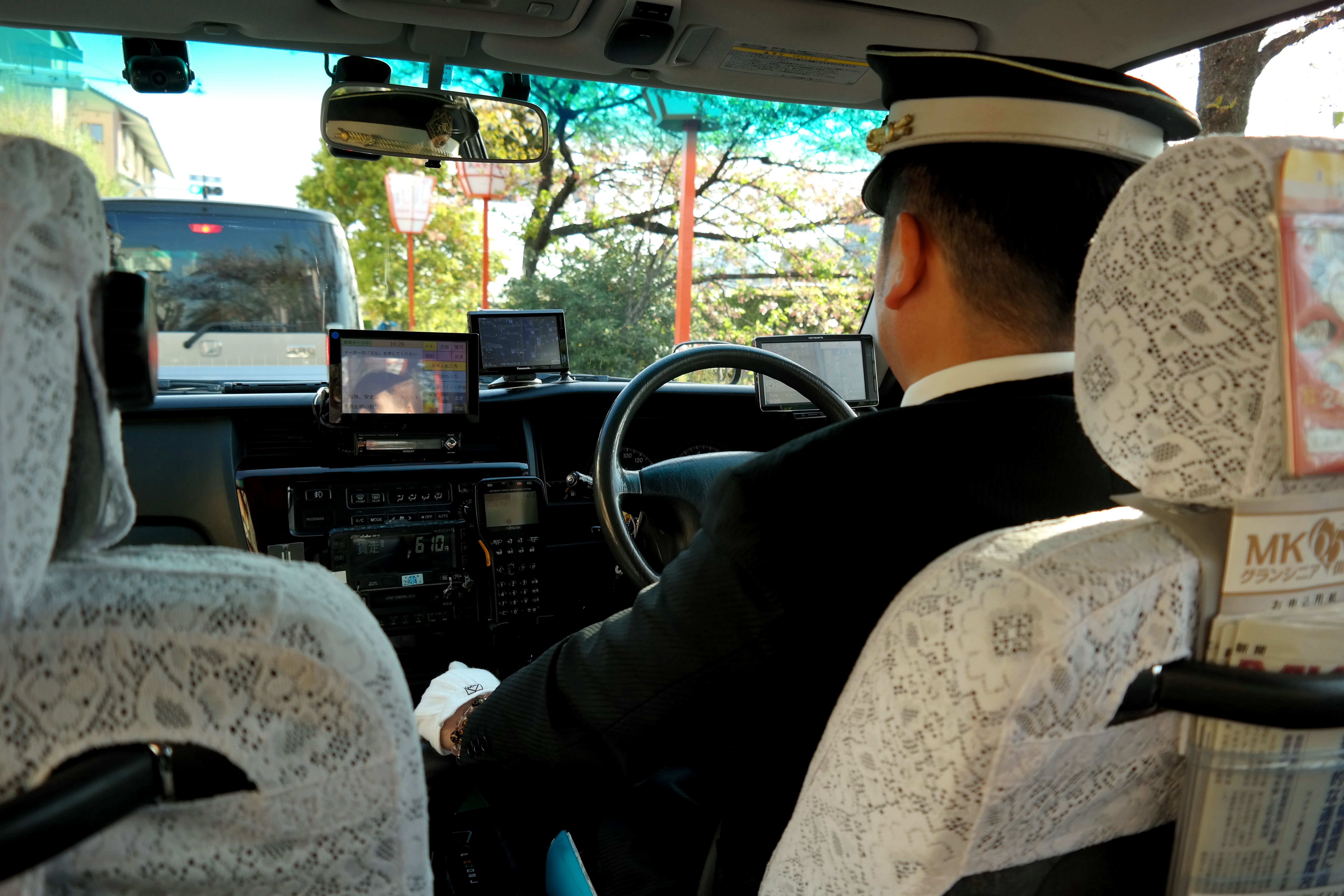 6. Traffic is safe. Road Safety Councils would applaud the large security deployment at intersections and road works: Dedicated cops blow whistles and swing sticks to guide everyone safely across traffic lights intersections. And when a few tiles are missing in the pavement, the “road work” is flash fenced and guarded by someone who looks like a lighted Christmas tree with reflective flashing jacket and a flashing stick to alert and direct pedestrians around. 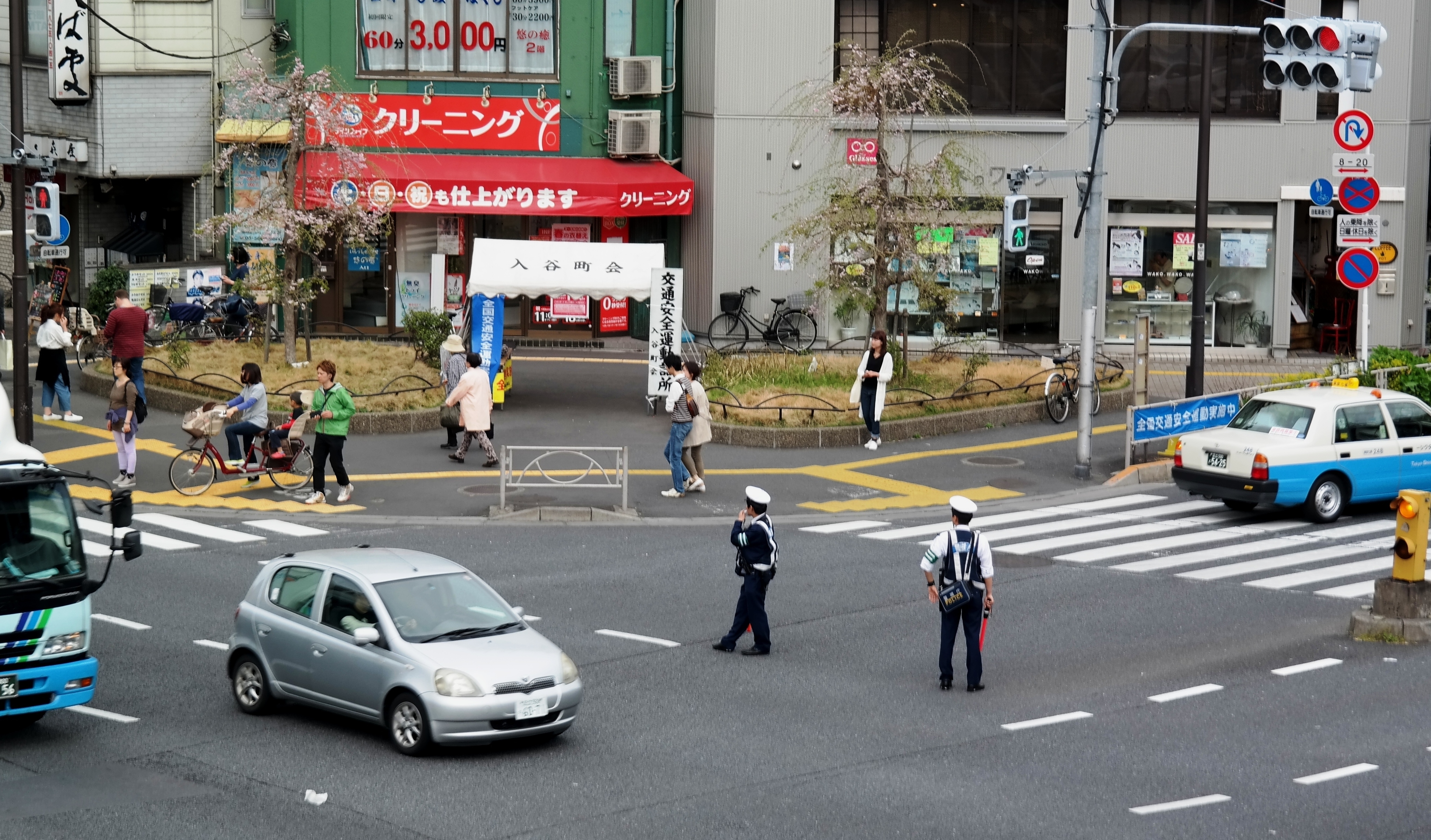 7. Candy and Cola Zero are rare. You don’t find any candy stalls in markets: Instead, you can have fish-on-a-stick or a stuffed mini squid as snack. Nuts and candied apples come closest to sweets as we know it. Japanese lifestyle is healthy, and Japan ranks high in life expectancy, but apparently, you don’t grow tall by eating fish and seaweed, or there might be genetic reasons for the Japanese to remain relatively short. 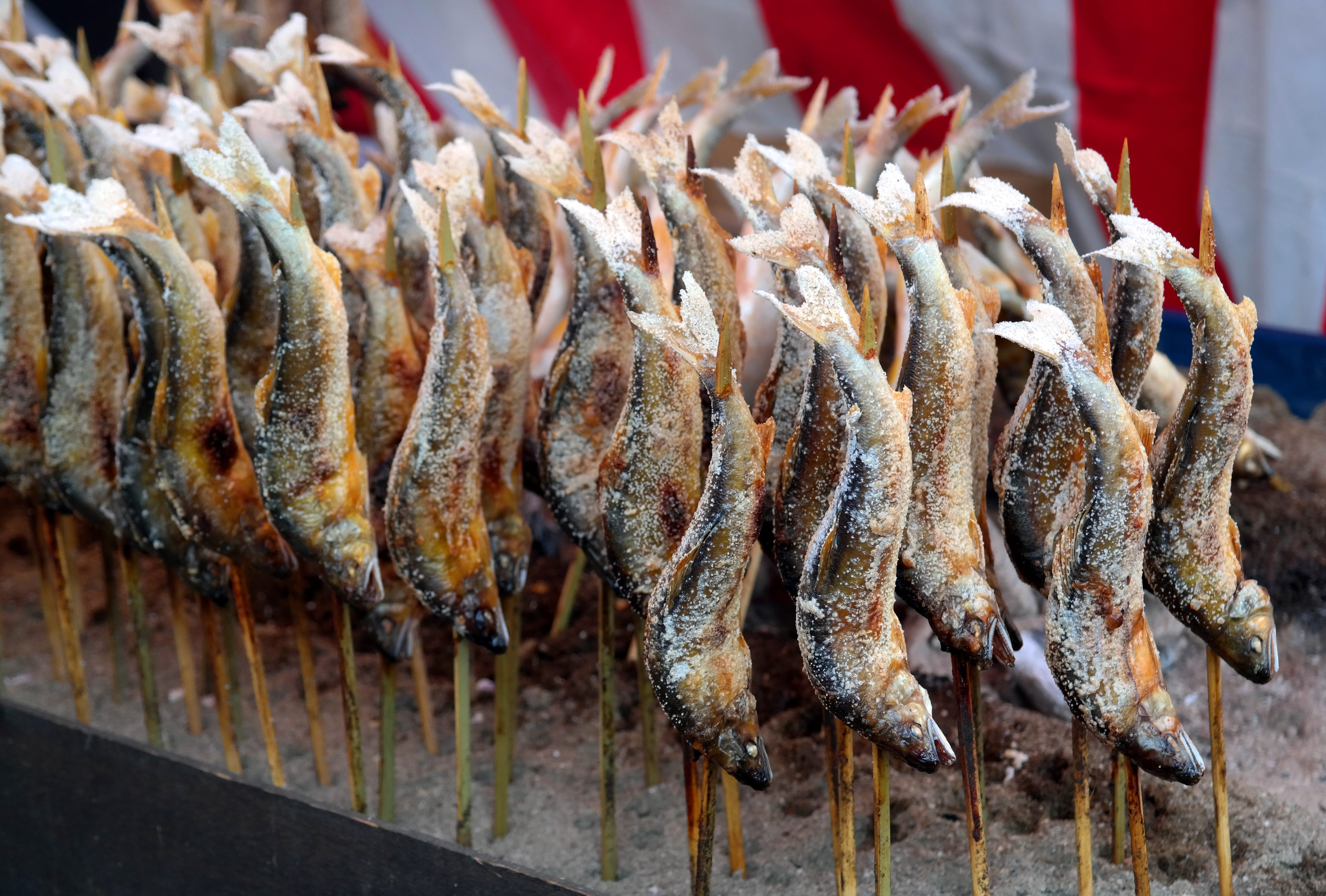 Fish on a stick

8. Japan is equal to fresh sushi. Not in itself surprising, but restaurant service is a pleasant surprise. When entering a restaurant, guests meet a loud common staff greeting, and this is repeated when they leave. It almost make you feel transported to the 1970’s Shogun TV-series. Sushi is often served at the bar, face to face with the chef who takes his job seriously. There is no giggling, even when the tourist (me) holds the sticks upside down. 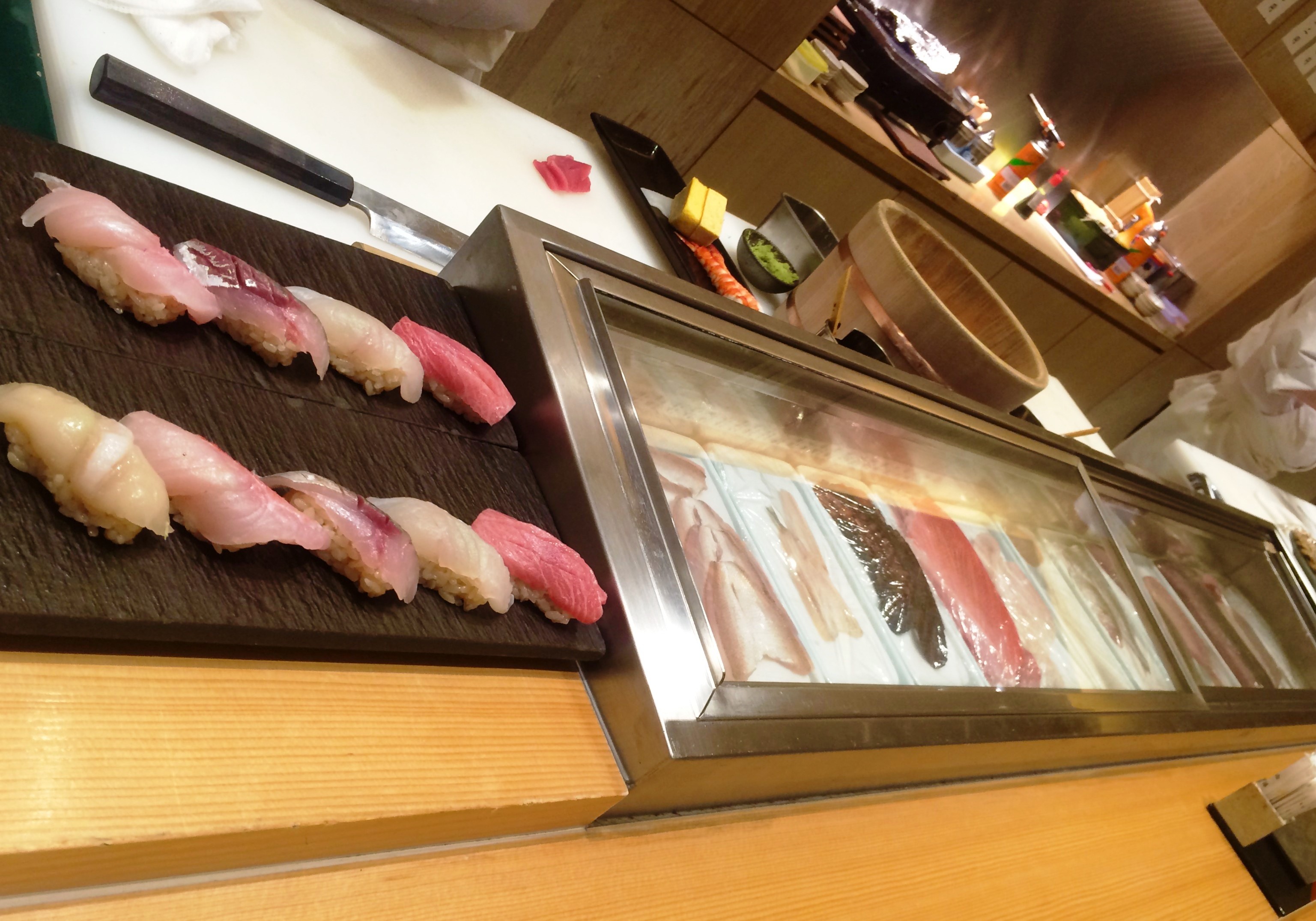 9. Japanese narrative appears selective. We visit Edo Tokyo Museum, which tells Tokyo’s history from the feudal society ruled by emperors and shoguns until today. We see shogun ceremonies and reception chambers, while sufferings of ordinary Japanese during the feudal period are absent. In comparison, European museums often have sections about epidemics and inadequate medical care, and display torture instruments used against unruly tenants. In Edo museum, we arrive at the WW2 section, which is all about American bombing of Tokyo. Not a single word about Pearl Harbor and the Japanese massacres of Koreans, Chinese, Filipinos, Malaysians, and Indonesians. The only element about Japanese aggression is primitive balloon bombs which are told to have landed on American soil and killed six Americans! A rather one-sided narrative; I wonder what Japanese children learn in history class? And I imagine how the polite and disciplined Japanese could turn on a dime if war broke out. They seem compliant and take pride in their jobs, whether it is to clean trains, direct traffic, or kill enemies. 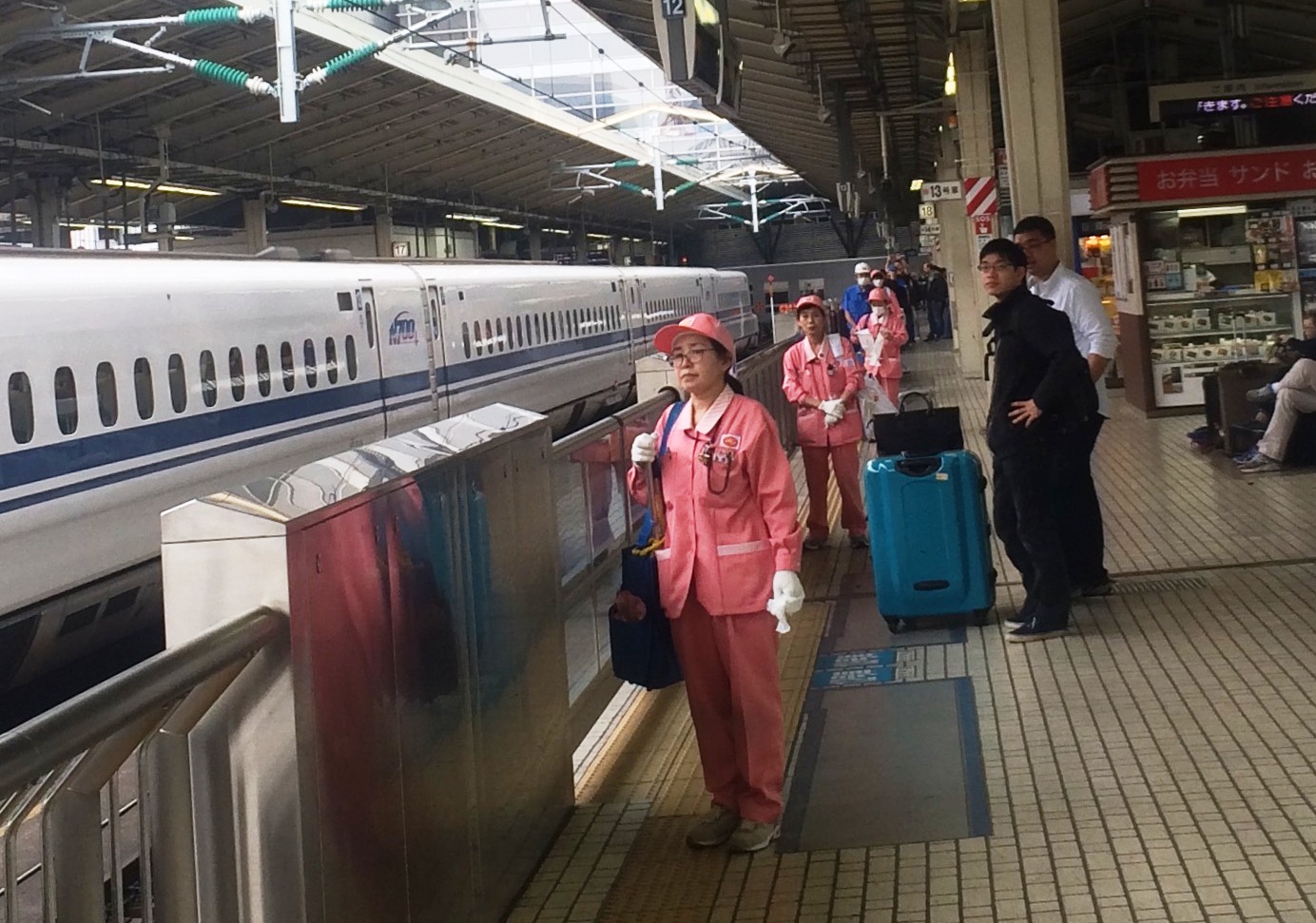 Pink army of Shinkansen cleaners lined up for next train arrival

10. MANGA is ancient. Well, that is our interpretation of some ancient paintings of warlords, battles, and old witches we see in Demboin, a former vicarage with an adjacent private garden in Tokyo’s Asakusa neighborhood. The paintings are not detailed but they show clear and exaggerated facial features and grimacing, a bit cartoon-like. Japanese pictorial narrative does go far back in time, but MANGA in its modern form was actually inspired by American comics after World War II and then Japanized in to its present form. 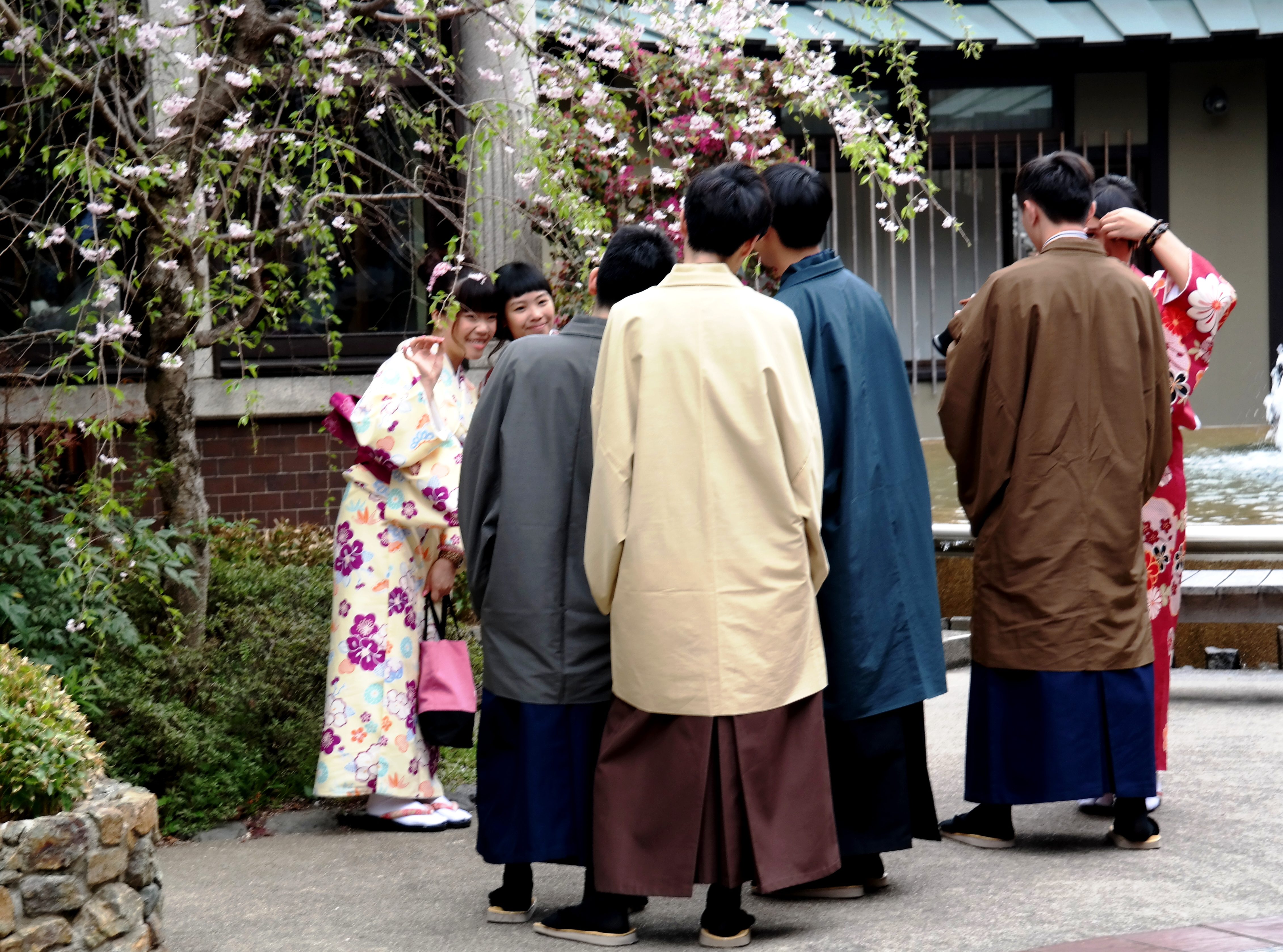 Dressed up in kimonos and ready for selfies

11. Romanticism is alive and well, and HANAMI (Japanese for “admiration of cherry blossoms”) in late March-early April is the peak season. People put on kimonos and stroll in parks and avenues, especially in Kyoto, arm in arm with their loved ones, to show off, look at cherry blossoms and take selfies! We consistently encounter kimonos, and it is impossible for us to figure out who are Japanese and who are tourists. We even meet a few geishas, but again we have no idea whether they are genuine or not.  Anyway, we enjoy the sight and envy the Japanese for having such beautiful national costumes.

12. Small dogs are in high demand. They are almost treated like children – and indeed they might be seen as a cheaper substitute considering the low birthrate in Japan. We see dogs being transported in strollers and dogs sharing café chairs and cake with their owners – and we smile at our own indignation.

13. Japanese are not into body contact. No hugs or handshakes are given, instead we notice people saying goodbye to each other by eagerly waving with both hands at one meter distance. It may have to do with cleanliness and mutual consideration to avoid spreading infections. And Japanese people must find it appalling to see all the Western hugging.

More photos from our trip Tokyo and Kyoto

I am a Danish writer, journalist, and communications specialist. After several years in The Netherlands, I am back in my home country, with one foot in London. I hold a M.Sc. in International Business Administration and Modern Languages, and I have brushed up my skills through studies at Webster University and London School of Journalism. I have worked with communications and business development most of my life. I do freelance work (English and Danish), and I write for pleasure. Most of my stories are about places and people I encounter on journeys around the world. I have an eye for cultural and social subtleties, and I am especially interested in travel, the environment, and the arts. Drop me a line if you want to hire me, or if you have a question or comment. And feel free to follow me on Twitter, Bloglovin' and Instagram.
View all posts by . →
This entry was posted in Asia, Culture, Japan, Travel and tagged culture, explore, health, history, holiday, Japan, Kyoto, sushi, Tokyo, traffic, WW2. Bookmark the permalink.